You could set your watch by Admirals Express and many, many of his fans did, every Saturday night for more than a decade.

Just as hockey fans in Canada have an internal alarm clock that buzzes on Saturdays at 7 p.m., racing enthusiasts perked up around 10:45 p.m. to check in on ‘the grey’, Canadian racing’s populist hero.

When they did, they saw the brawny, gallant warrior they were expecting. The horse was a dependable beacon, always consistent, always reliable and always on the front — come hell or high water — never looking back.

“I really admired the horse just for the fact that he showed up every week, week in, week out. He never took a week off. A lot of horses show up to race, but they don’t really race. Not him. He showed up to compete every week and that is what I loved about him,” said Paul MacDonell, the man who drove Admirals Express more than anyone else.

“I still have people say to me, ‘I used to watch him every Saturday night. I just loved that horse.’ People tuned in to watch him. He was the people’s horse, for sure.”

If it was his eye-catching grey colouring that initially commanded attention and drew people in, it was his blue-collar work ethic that kept them coming back for more. He’d be there at all times of year, in all weather, against all comers.

It was both accessories, the grey coat with the blue collar, that transformed a $3,700 Michigan-bred gelding that never won a race worth more than $100,000 into one of the most recognizable and beloved horses in Canadian racing history.

Bred by Michigan’s Pebble Creek Farm, the son of Admirals Galley—Platinum Card got his start at the Michigan fairs before setting a course for the Woodbine Entertainment Group (WEG) circuit, where he’d regularly compete from 1999 to 2009 en route to becoming an iconic figure in Canadian racing. 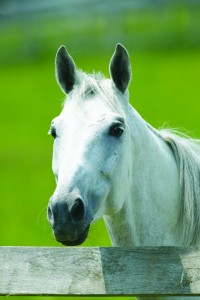 Owner Ed Sayfie is one of the first to acknowledge that other horses had more impressive times, more prestigious stake prizes and more abundant bankrolls.

However, he’d put his horse’s ‘big three’ — a Canadian horse of the year title, a Cam Fella award for meritorious service to the industry and his upcoming induction into the Canadian Horse Racing Hall of Fame up against anything, with the great Somebeachsomewhere and Cam Fella the only other horses with that hat trick to his name.

“He had an iron will. He, obviously, had God-given gifts in having a large stature and good health, so that’s part of it, but the heart he had was unsurpassed by any other horse I’ve ever seen,” said Sayfie, who shared ownership with his wife Cheryl and partners Gary and Laurel Gust of Michigan.

“Yes, there have been many, many horses that have done greater things, with greater times and won more money, but week after week after week I don’t think there’s a horse out there that did what he did.”

Although his stature as a fan favourite grew to be his legacy, Admiral Express’ lifetime statistics have a heroism all their own.

The horse got better with age, setting his lifetime mark at age nine with a 1:48.2 mile that was Canada’s fastest of 2005 and tied Woodbine’s all-age record at the time.

He won 15 times in 1:50 or better, more than some of the richest and most decorated pacers of all time, including Gallo Blue Chip, Won The West, Boulder Creek, Shark Gesture and Escape The Wind.

Yet, without a doubt, it was his connection with racing fans that enhanced and elevated all other characteristics and statistics. Admirals Express is one of very few horses in the 21st century who can legitimately claim to have brought people to the track just to see him.

When his long career ended in early 2010, the fans continued to follow him around the province, as he became an ambassador at horse shows and racetracks alongside with his doting caretaker and friend, Wellington Charles.

And his fans, as well as his connections, were heartbroken when news came of his death in October of 2010, at age 14, after suffering an irreparable leg injury.

For Sayfie, the Hall of Fame is a wonderful and fitting place for such a unique story to be immortalized. Admiral Express was not in the mould of his fellow 2013 inductees Niatross, Eternal Camnation or, most illustratively, Secretariat.

Admirals Express was a story, a feeling.

“He did it a different way. He didn’t do it in big-money races or with 1:46 miles. He told his story in a different way and it connected with people because it was a story that they wanted to be a part of and they were. I think, between him and his fans, that story was told over those 10 years of racing and so the story will go on now, forever, in the Hall of Fame.” 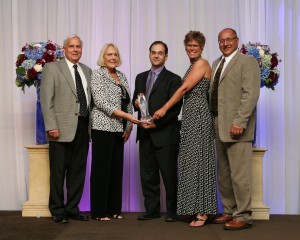 Owners of the ever popular Admirals Express, Ed and Cheryl Sayfie and Laurel and Gary Gust are presented the “Grey Gladiator’s” Hall of Fame Award by Darryl Kaplan, CHRHF Standardbred Nomination Committee Chair