Thoroughbred Trainer
The numbers don’t lie. Ronald K. (Red) Smith is among the greatest trainers of thoroughbred horses in the history of Alberta racing. He won more than 2,200 races during a 46-year career, more than any other trainer in that province. Since 1975 the lanky 66-year-old Vancouver native had won 12 Alberta training titles. Nobody else can make that claim. He also is a Sovereign Award winner as Canada’s leading trainer, a title he achieved in 1977 while training for Bory Margolus’s Elmbrook Stables of Edmonton. For seven years in the 1970s it was the leading money-winning stable in the province.

But the numbers are only part of Smith’s incredible story. If you compiled a list of the star horses that have come from his stables at Edmonton’s Northlands Park or Calgary’s Stampede Park, it would be taller than the height of a NBA basketball player. 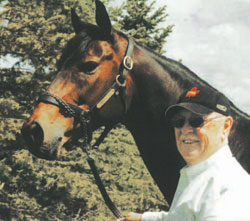 Fancy As won the Canadian, Alberta and
British Columbia Derbies

He conditioned such recognized runners as Fancy As, Sea Reason and Ky Alta, who was so successful under Smith’s tutelage that the major Canadian Derby prep race at Northlands Park every summer is named the Ky Alta Stakes. Smith once stated that Ky Alta was the most versatile star he ever trained and figured it could run down a length of railway tracks and win. If you looked at the horse’s success under Smith, you’d believe that statement. Sea Reason, arguably the most talented horse to ever run in Alberta, won the Stampede Park Futurity in 1973. The win marked the second consecutive Futurity title for Smith and was part of a phenomenal string of successes in that race. He won four successive Futurity titles at the Calgary oval between 1972 and ’75 and added another title in 1977, the year Smith earned Sovereign Award honors. In 1995 Smith was honored as Alberta Horseperson of the Year. He trained Two Ticky – Alberta Horse of the Year – that season.

Fancy As was the latest superstar to come from Smith’s barn, a horse that was a finalist for a Sovereign Award in 2001 as champion three-year-old in Canada. He owned it in partnership with his wife Linda – they bought it for just $3,200 – and Smith clearly had a soft spot in his heart for the gelding, who went on a 12- race winning streak and was undefeated at Stampede Park while earning $650,000. In 2001 Fancy As won the Canadian, Alberta and B.C. Derbies and the Premiers Championship Handicap in Vancouver.

Smith’s activities away from his stable are considerable. He served as a director of the HBPA of Alberta for 29 years and for a period as Vice- President. He also operated a significant breeding operation known as Red Ron Farms north of Edmonton for over 20 years, consigning yearlings to Alberta’s CTHS annual auction sales. 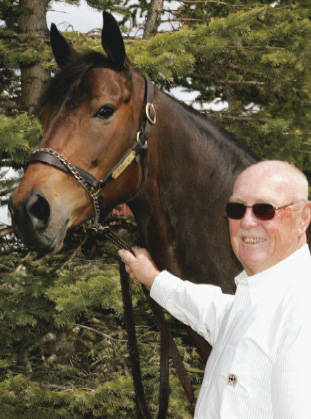