As a 2-year-old in 1981, Deputy Minister was in a class by himself, capturing almost every award possible – an Eclipse as North America’s champion juvenile; Canada’s Horse of the Year and the first Canadian-bred to head the U .S. Experimental Handicap. The son of Vice Regent was bred by Mort and Marjoh Levy’s Centurion Farms of Ontario and was out of Mint Copy, a mare her owners had claimed for $6,250. After his early successes for trainer Bill Marko, the Levys sold a half interest to Kinghaven Farms. The following year Robert Brennan’s Due Process Stables bought a half interest in the promising colt and became sole owner in 1983.

Deputy Minister’s juvenile campaign was truly remarkable as he won the Bull Page, Clarendon, Victoria and Colin Stakes at Woodbine, setting a five-furlong track record, before heading to the United States to win the Gr.1 Young America, Laurel Futurity and Youthful. His only loss, which came after recovering from a virus, came in the Champagne Stakes. Injuries thwarted his progress in 1982 and ’83, but he still mustered enough class at age four, winning the Gulfstream Sprint Championship, Hialeah’s Donn Handicap and the Tom Fool Stakes at Belmont for trainer Rey Nobles. During his career he won 12 times (10 stakes) with two seconds and two thirds in 22 starts. A horse of amazing speed and indomitable courage, he was the exceptional “Cinderella” homebred who thrilled racing fans both in Canada and the United States.

Deputy Minister, however, would gain greater accolades following his retirement to Windfields Farm in Maryland. After five years he was moved to Brookdale Farm, Lexington, Ky. His prowess at stud through his sons and daughters continues into the 21st century. One of his sons, Awesome Again, winner of the Breeders’ Cup Classic in 1998, became the first Classic winner to sire two Breeders’ Cup winners in one afternoon when Ghostzapper won the Classic and Wilko the Juvenile in 2004. Deputy Minister’s daughters, Open Mind and Go for Wand were both champion fillies at ages two and three and also Breeders’ Cup winners. Touch Gold won the Belmont Stakes and Dehere was an Eclipse winner at age two. Diva’s Debut and Hello Seattle were Sovereign Award winners. Deputy Minister died Sept. 10, 2004, and was buried at Brookdale Farm. 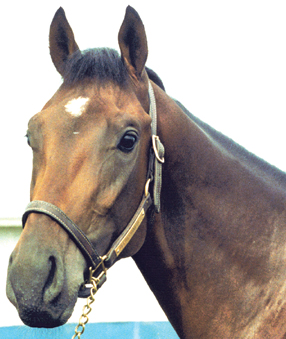