The Way We Were is an informal pictorial history of horse racing, focusing on its beginnings in 1797 on a sandy strip of land on the peninsula connecting Toronto Island to the mainland, right through to the opening of the new Woodbine north of Toronto near Malton Airport in 1956. 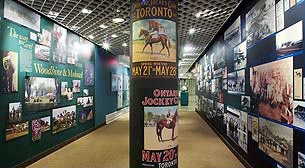 Horse racing throughout the province, as well as the rest of Canada, from The Maritimes to British Columbia, is also captured in aging maps and photographs, artist paintings and sketches, old posters, programs and mutuel tickets. Horse racing posters, some more than a 100 years old, decorate the two pillars.

The equine sport captured here on this 44-foot mural features thoroughbreds, standardbreds and steeplechasers and the many tracks at which they performed, most of which no longer exist.

The bulk of the archival material has come from the Archives of The Ontario Jockey Club and Standardbred Canada. The remainder has been retrieved from The City of Toronto Archives, Alberta Archives, racetracks and agricultural fairs across Canada and from the collections of dedicated racing fans that share in a common passion of preserving the beginnings and memorable moments in the sport.

Where The Races Were Run

Prior to 1800 – “The Bend”
Toronto Island – A sandy neck of land that connected the central portion of the Peninsula (the western tip of the Peninsula at Gibraltar Point) with the main shore to the east. On Sept. 16, 1793, Mrs. Elizabeth Simcoe, the wife of Lieutenant Governor John Graves Simcoe, and Lieutenant Thomas Talbot, informally inaugurated horse racing on the Peninsula. Races, which were informal, were held periodically among military officers and local citizens. The course was not oval-shaped but a long, straight level track.

1820s to 1837 – Garrison Common
The Upper Canada Turf Club (organized in 1837) grew out of a series of military races under the patronage of officers stationed at Fort York on a course laid out in 1835 on Garrison Common between the new and old forts. There was also an informal course on Front Street between Small’s Corners (east of the Don River) to Market Place during the early 1800s. Placards posted throughout the town heralded the matches.

1837 to 1840 – Scarlett’s Simcoe Chase Course
On the property of John Scarlett, who lived in the Humber Valley above “The Old Mill.” The property stretched north and east a considerable distance. His estate was named “Runnymede”, which accounts for the name of the western section of the city. The course, managed by the City of Toronto and Home District Turf Club, was north of Dundas Street between Weston Road and the woods on the bank of the Humber River. (It was near the present boundary of Lambton Golf Course north of St. Clair Avenue.) Inaugural Meeting: September 6 – 9, 1837.

1841 to 1845 – St. Leger/Union Race Course
Situated on the Bill Boulton’s property back of The Grange. Boulton was the track manager. It was also known as the Union Course. It was just south of the Cricket Grounds and College Street and was bordered by Spadina Avenue on the west, as well as streets later named Baldwin and McCaul.

1840s – Maitland’s Course
Managed by Jack Maitland, it was south of Queen Street East, and east of Broadview Avenue near the Don River and Kingston Road. The locale is now the Cherry Street district.

1854 to 1870s – Newmarket Race Course
North of The Danforth and east of the Don River (between Coxwell and Woodbine Avenues). In 1869 Nettie won the ninth running of the Queen’s Plate at Newmarket. Charlie Gates, owner and trainer of the 1870 Plate winner at Whitby, owned and operated the east Toronto track. He also owned Gates’ Hotel near Main Street, which was a popular hangout for horsemen.

1857 to 1876 – Carleton Race Course
On William Conroy Keele’s farm in an area known as the West Toronto Junction. This tract of land was adjacent to Lambton Mills, Brockton, Seaton and the village of Carleton. It was south of Dundas St. and west of a road later named Keele St. To pinpoint it further the track’s northern and southern boundaries are Annette and Glenlake, streets that were built after the track had been subdivided into building lots in 1883. In 1857 it became the headquarters of the Toronto Turf Club and hosted the first running of the Queen’s Plate on June 27, 1860. The first four Plate races were run here.

1875 to 1993 – Woodbine Park
Also known as The Woodbine, Old Woodbine and Woodbine Riding and Driving Park. Named Greenwood Race Track in 1963. On Joseph Duggan’s property south of Queen St. between Coxwell and Woodbine Ave. The track backed onto Lake Ontario and Ashbridge’s Bay prior to the construction of Lakeshore Blvd. Hosted the Queen’s Plate in 1876, 1881 and 1883 – 1955. Inaugural Meet: October 19, 1875. The meet featured trotting and thoroughbred races and steeplechasing. Harness racing was discontinued in 1894 but returned in 1954. Steeplechase racing discontinued in 1953. Final thoroughbred race: Dec. 8, 1993; final standardbred race: Dec. 31, 1993.

1879 to 1938 – Exhibition Park
CNE Grounds. Harness racing only. The immortal world champion pacer Dan Patch performed on the Ex’s half-mile track in the autumn of 1905 and broke the Canadian record for a mile by 1 1/4 seconds. Grattan Bars, Archie Peden’s sensational pacer from Strathroy, Ont., set a track record in 1927.

1907 to 1955 – Dufferin Park
Dufferin Ave., south of Bloor St., and north of Muir St. On west side of Dufferin St., and east of Brock St. Harness racing as well as thoroughbred meets were staged initially by the Toronto Driving Club. Later owned by Abe Orpen and his son Fred. Toronto mayor Sam McBride served as president for many years. The track was founded by the Denison family, who had received grants of land from the Crown because of its outstanding service to King and Country. Charles Leslie Denison built a training course on this location.

1920 to 1952 – Thorncliffe Park/Raceway
In village of Leaside; east of Millwood Rd., south of Eglinton Ave., and north of CPR line.

1924 to 1955 – Long Branch Race Track
Bordered by Evans, Kipling and Horner Avenues and CPR Railway Line. Owned and operated by the Orpens – Abe and his son Fred – it was the home of the Long Branch Championship Stakes (later named the Canadian International Stakes) and Mrs. Orpen’s Cup and Saucer Stakes Handicap).