And the Winner is……

A longtime Canstar newspaper reader, Evelyn MacKenzie-Reid, who says she loves horses has won the Canstar contest to Name the Filly. 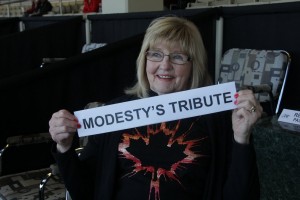 Evelyn MacKenzie-Reid winner of the Name the Foal Contest

And how excited was she to hear her filly name had been chosen from a whopping 848 names?  “My daughter couldn’t understand a word I said when I left a voice message telling her,” she said.

And her suggested name that the three judges settled on after wrestling with a short list of about a half-dozen names?  Modesty’s Tribute.

The theme of the contest was the celebration of Canada’s 250th anniversary of horse racing so what better name, agreed the judges, than a “tribute” to a mare by the name of Modesty, who won the very first organized horse race on the Plains of Abraham in Quebec City on July 1, 1767.

Ya, I know. It all seems so obvious now and you might be wishing you had submitted a different name. (I was a judge along with Canstar sales rep Shelley Morgan and Sherisse Ziprick from the farm where the filly was bred.)

The contest winner, who works from home providing accounting and administrative services, said she was endeared to the filly by pictures that showed “a nice long blaze” on the filly’s forehead. “I had a foolscap full of names,” she said, but ultimately it was her online research into the 1767 race that ended with Modesty’s Tribute and another name, Modesty’s Glory, she said.

In fact, about 15 entrants submitted Modest or Modesty in their filly names. Dozens also  incorporated a “250” reference into their names (although it had to written in words since numbers cannot be used in horse names). So CCL (the Roman numerals for 250) was popular as was a more obligue reference: Sestertius which is a Roman coin that means “two and a half.” (Very creative!)

A name that made the short list was “Sixty Two Fifty” because it linked Assiniboia Downs’ 60th  season of racing AND the 250th anniversary.

Many names were simply fun: FillyGonnaThrilly, Horsie Mchorseface, Portage and Mane, I Found My Purse and Horse with no Name. An entrant by the name of Ron decided to fit his name—twice—into his suggestion: Da Doo Ron Ron.

MacKenzie-Reid wins $250 cash, a suite for 16 at a Winnipeg Goldeyes baseball game and bragging rights forever. (“I’ve never had any public fame like this,” she said.)

Modesty’s Tribute goes on the auction block at the end of August in the annual yearling sale. Who will be part of Chapter 2 in the filly’s life? Will it be you?

In the meantime, much thanks to everyone who submitted a name. Hope it was as much fun for you as it was for the judges who weighed your choices! See you at the races Wednesdays, Fridays and Saturdays!

As part of the 250th anniversary of horse racing in Canada celebrations Assiniboia Downs is hosting a “Name the Foal Contest” co-sponsored by the Canstar group of community newspapers. 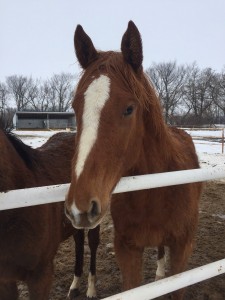 The foal is a filly, bred at the Ziprick Thoroughbred Farm in Russell, Manitoba and the name should be tied to the 250th Anniversary of Racing.

The winner will receive $250 ($1 for every year of racing in Canada) and a 16-person suite at a Winnipeg Goldeyes Games.  The winner will be honoured in the Winner’s Circle at Assiniboia Downs following a special race named in honour of the Anniversary on July 1.

The contest co-sponsor Canstar already has a special race, the Canstar Canada Day Stakes which is held annually at Assiniboia Downs on Canada Day.

A fireworks display will be held after the races that night to celebrate both the historic day in racing and, of course, the 150th Canadian birthday.

The contest begins May 24  and the deadline for submissions is June 17.
Submission Details