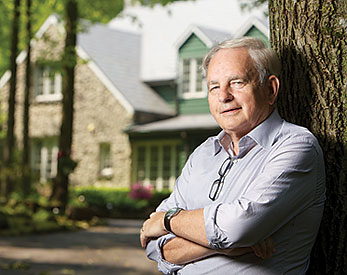 The Canadian Horse Racing Hall of Fame extends condolences to the family, friends and business associates of CHRHF 2011 Standardbred Builder Inductee, Robert (Bob) Burgess Q.C. who passed away Saturday, April 3, 2021.
A lawyer specializing first in the corporate world in Toronto before shifting in equine law when he moved to Campbellville, believed his biggest contribution was incorporating and acting as council for the Ontario Standardbred Improvement Association (now known as the Standardbred Breeders and Owners Association) that resulted in the formation of the much-heralded Ontario Sires Stakes program.
His son and fellow CHRHF Honoured Member (Class of 2017), Blair Burgess when interviewed at the time of his father’s induction, said, “For the better part of his adult life my father has lived and breathed racing. From just attending the races as a small-time gambler and racing fan to stepping up and claiming his first horse, he never would have imagined a person such as he, with no farm or horse background, would make harness racing his life work.”
Robert was born in Peterborough, ON in 1935. When he was in Grade 11, he moved with his family to Quebec City where his brother, Dick, developed a passion for betting on standardbreds. “He went to the races and dragged me there,” Robert said of Dick. “When we came to Toronto, we were both practicing law downtown and we used to go to Greenwood every Monday night and every Thursday night. Eventually, we claimed Danny Duke for $3,125.”
It was the start of decades of horse ownership that continued until his passing.
Eventually, Robert, Dick and their father, Bert, under the Tri-Burgess Stable bought a broodmare and became breeders. Robert and partner John Macdonald founded Cantario Farms in Campbellville, ON in the mid-1970s. The farm became one of the leading breeders of standardbred horses in Canada during the ’80s and early ’90s.
His most notable achievement as a breeder was syndicating Balanced Image, introducing the great trotting sire to Canada. Balanced Image produced more winners than any trotter in history, including two Hambletonian winners. His progeny earned over $109 million combined. Balanced Image was inducted into the Canadian Horse Racing Hall of Fame in 2000.
Robert co-owned many champions over the years trained by his son, Blair, for the family. The first big one was Amity Chef, the pacer of the year in 1986. “We never had a horse that could beat anybody and then we had Amity Chef,” Robert said.
The next year, Frugal Gourmet won the $1 million Meadowlands Pace. A year after that, Road Machine won the Metro Pace. Real Desire, a winner of $3.3 million won the 2001 Meadowlands Pace.
In 2003, the family scored its first Hambletonian triumph when Amigo Hall was victorious. Three years later, Armbro Deuce won the Confederation Cup and Glidemaster delivered the Hambletonian, trotting Triple Crown and U.S. horse of the year award.
In 2007, Tell All won the family its first North America Cup. Tell All shared Canada’s horse of the year award that year with two-year-old Somebeachsomewhere.
In 2010, Robert picked up another O’Brien Award with his homebred two-year-old, Blue Porsche who won as Canada’s top two-year-old trotting colt. Blue Porsche, the winner of the Goodtimes Stakes at Mohawk in 2011, is a son of Glidemaster.
Upon his induction into the Canadian Horse Racing Hall of Fame in 2011, he deferred credit to his success to those around him, speaking proudly of his son who trains the horses and his late wife who handled much of the business end of the game for the family. “I actually think Blair and Vera did more than I did. They’re not in the Hall of Fame. She never will be, but Blair will be.” Robert’s words came to fruition when Blair joined the Hall in 2017.
A tireless advocate for the Standardbred industry, Bob’s legal work later in life focused on representing horsepeople. He was also a key participant in the breeders’ lawsuit against the Province of Ontario, providing information and testifying on the industry’s behalf.
Bob is survived by his dedicated and caring wife Heather and her family, and his five children from his first wife, the late Vera: Blair (Karin), Timothy (Lan), Pamela (Michael), Stephanie (Stephen) and Katherine (Christopher). Bob is also survived by his 17 grandchildren and two great-grandchildren. Bob also leaves his brother Richard (Odette), sister-in-law Vera (Carl, deceased), while predeceased by sister-in-law Eva (George, deceased).
A small private family service will be held. Donations can be made in Bob’s name to the Ontario Standardbred Adoption Society.