The winner of 128 races in 305 starts during the 1970s and early 1980s, Rambling Willie was a three-time winner of the Canadian Pacing Derby – 1975 in a dead heat with Pickwick Baron, 1976 and 1977.  At the time of his retirement in 1983 he was the leading Standardbred money winner of all time earning more than $2 million, with most of his wins coming from overnight and invitational races.  A $15,000 purchase by trainer/driver Bob Farrington, ownership was later split between Bob’s wife Vivian and Paul Seibert.  Mrs.  Farrington in turn pledged 10% of Willie’s earnings to the church where her father served as pastor, earning the gelding the nickname “The Horse That God Loved”.  In 1981 a book titled with that nickname was published.  Willie and his connections did a promotional tour that included races in 17 cities and appearances on television shows including 60 Minutes.  Following his retirement from racing in 1983, Willie moved to the Kentucky Horse Park where he resided until his passing in 1995, when he was buried near his paddock at the Hall of Champions.  Rambling Willie was inducted into the United States Harness Racing Hall of Fame in 1997 and into the Indiana Standardbred Hall of Fame in 2003. 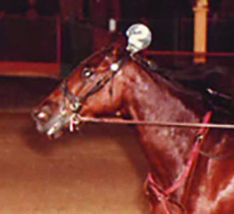