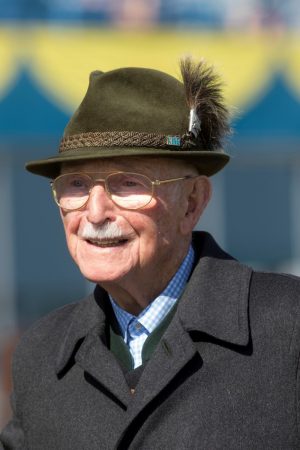 Gustav Schickedanz was a survivor, a home builder, as well as a breeder and owner of Thoroughbred horses. He was also an elegant, classy gentleman who always greeted with a kind smile and a tip of his hat. His recent passing at age 90 is a tremendous loss to Canada’s horse racing industry. From his Thoroughbred breeding operation at Schonberg Farm near Nobleton, ON came the likes of Canadian Triple Crown winner Wando by homebred Langfuhr who himself won four major U.S. stakes races, the Forego, Vosburgh, Carter and the Metropolitan Handicaps and a Sovereign Award as champion sprinter. Other Langfuhr success stories included Eclipse Award winner Lawyer Ron; Mobil; Jambalaya, a triple stakes winner in the U.S.; Kimchi and Marlang. Langfuhr also led the American sire lists in winners on three occasions.

Schickedanz is the only Canadian to breed winners of the Kentucky Oaks (Gal In A Ruckus), Canadian Triple Crown (Wando) and the Arlington Million (Jambalaya). He also won two Queen’s Plates with Wando and Woodcarver. His Sovereign Award winners include Wando, Mobil, Langfuhr, Glanmire and Kimchi. Schickedanz was a finalist for Breeder of the Year multiple times, and earlier this year was awarded a special Sovereign award E. P. Taylor Award of Merit by the Jockey Club of Canada.

Mr. Schickedanz shared a life-long friendship with Standardbred breeder H. Charles Armstrong, also a CHRHF member. The two were co-breeders of Goodtimes, formerly Canada’s richest Canadian-bred trotter with earnings of $2.2 million and a member of Canadian Horse Racing Hall of Fame. One can only imagine the reminiscing and stories these two pillars of Canadian horse racing shared during their lives.

The Canadian Horse Racing Hall of Fame extends our condolences to Gus’s wife Ann and their family as well as all those who loved him, including his long-time and loyal farm manager Lauri Kenny and dedicated trainer Mike Keogh.

In true Gus style we raise a glass of Oban scotch in your honour Mr. Schickedanz as we imagine you leading a hunt through the heavens surrounded by all your favorite horses.

To learn more about the life and career of Gus Schickedanz can be found here.