The equine galaxy of Canada’s illustrious fillies, from the likes of Dance Smartly, La Prevoyante, Fanfreluche and Northernette, was augmented by a filly who sold for just $5,577 at the CTHS yearling sales of 2012. Lexie Lou was an ultimate bargain, a filly who would go on to win the Queen’s Plate and Canadian Oaks, numerous stakes races and earn accolades as the 2014 Horse of the year as well as three Sovereign Awards as champion grass horse, 3-year-old filly and turf female during a four-year career.

Consigned to the sales by Paradox Farms in Caledon, ON, Lexie Lou was purchased and initially trained by owner John Ross. Her breeding was nothing to get excited about.  Irish-bred sire Sligo Bay had only moderate success with his first crops, and her dam, Oneexcessivenite, was less impressive as her first three foals were unraced.

As a juvenile she won the Muskoka Stakes on a disqualification, placed second in both the Princess Elizabeth and Victorian Queen, and then finished her season with a win in the South Ocean.  Her 3-year-old season would stamp her as a truly outstanding filly. After a fourth-place finish in the Star Shoot Stakes, she was sold to Gary Barber, CEO of Metro-Goldwyn-Mayer Studios, for $300,000. Barber was so impressed by the way she kept running after the finish line that he asked trainer Mark Casse to buy her. A loss in the Fury Stakes was followed by convincing victories in the Canadian Oaks, the Queen’s Plate and the Wonder Where Stakes on the turf at Woodbine. After a second place finish against older horses in the Canadian Stakes, she was shipped to California, where she won the G2 Autumn Miss Stakes at Santa Anita and rallied to finish second to U.S. Horse of the Year and Kentucky Derby winner California Chrome in the G1 Hollywood Derby at Del Mar.

At age four, running on a dirt surface for the first time (all her previous starts had been on the turf or Woodbine’s poly surface) she finished second in the G2 La Canada Stakes at Santa Anita.  It was time for a rest, nine stakes races in nine months.  Later that year, she suffered an eye injury and was set down until 2016 when she came back as a 5-year-old, adding two more stakes to her resume, the G2 Nassau and G2 Dance Smartly and earning Champion Turf Female honors. Lexie Lou retired with 10 wins and earnings of $1,763,538 and was sold in 2016 at the Keeneland November Bloodstock Sales for $1 million to Japanese interests in Kentucky. Lexie Lou was bred to Frankel and was shipped to Japan. 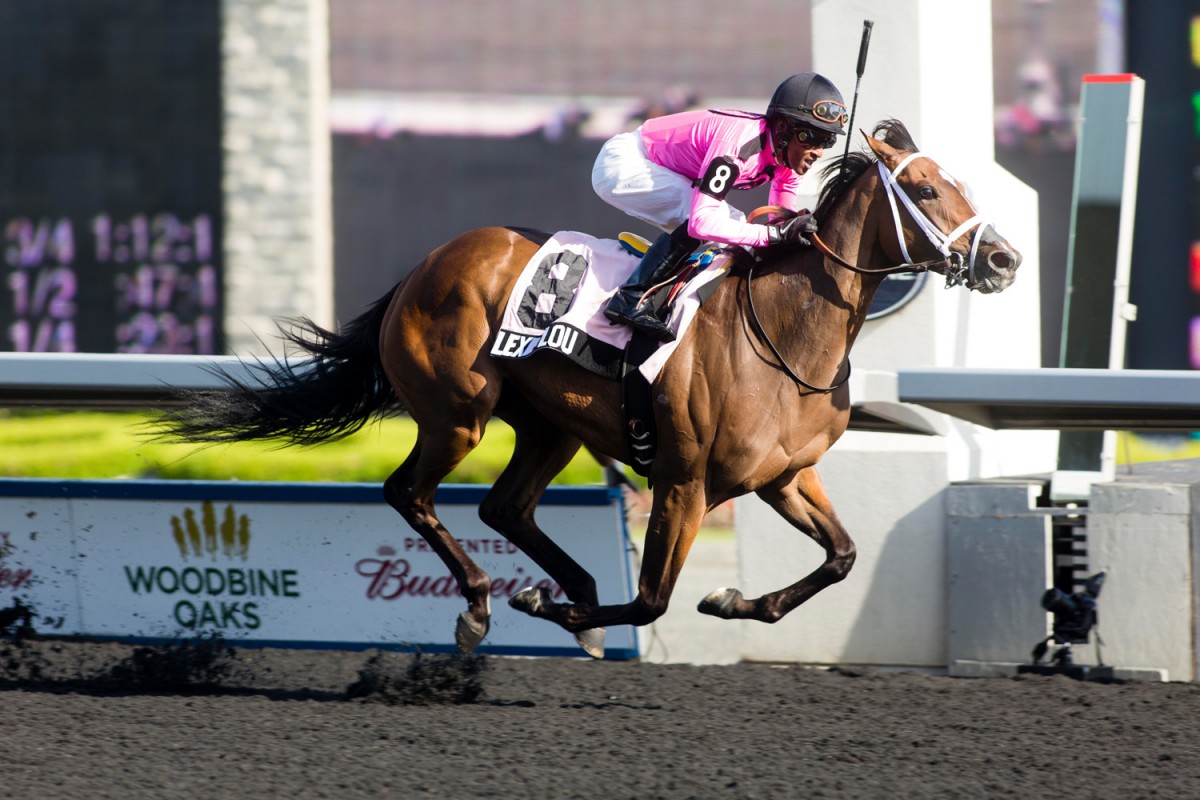