When the Canadian Horse Racing Hall of Fame unveiled the list of its 2019 class, both horse and human, Winbak Farm’s Ontario farm manager Pat Woods said he was ecstatic and proud when he saw the name Angus Hall.

In the aftermath of the announcement, Woods would often get the same reaction from horsepeople he encountered during his travels to southwestern Ontario racetracks.

“It’s funny,” Woods said. “I’ve had so many people say to me, ‘We didn’t know he wasn’t in (the Hall of Fame). We just assumed he was.’ It says a lot to me. There have been a lot of really good horsepeople that have seen me at the racetrack and said, ‘It’s a very deserving honour for him.’ They’ve always respected him and loved his foals.”

The trotter, a son of Garland Lobell—Amour Angus, bred by Québec’s Ferme Angus, earned over $830,000 during his racing days. In 26 career starts, the horse with two white hind ankles recorded eight wins, and finished in the top three in all but four races. He was the first 2-year trotting colt to break the 1:55 barrier, winning in 1:54.4 at (one-turn) Colonial Downs on Nov. 7, 1998.

Impressive achievements, no doubt, but accomplishments which take a second seat to Angus Hall’s stature as a stallion.

Sold for $125,000 as Hip #67 at the 1997 Tattersalls Yearling Sale, Angus Hall has sired over 1,700 horses during a stallion career that spans nearly 20 years, with 71.5 per cent of his foals having race careers. His offspring have earned over $102 million, and include six millionaires: 2008 CHRHF inductee Peaceful Way, Majestic Son, Elusive Desire, Winning Mister, Frenchfrysnvinegar and Laddie. His significance to trotting bloodlines continues through notable broodmares whose offspring have earned over $45 million.

Beyond his reputation within the standardbred community, Angus Hall is the ideal horse to work with, Woods said.

“He has a great attitude about him,” said Woods. “He just carries himself like a winner. He’s got a great personality and is so easy to be around. He’s the barn favourite for sure. He doesn’t engage in the silliness other stallions do. This is a horse that doesn’t cause any problems and is easy to handle – just a very likable horse.”

Since the Hall of Fame came calling, some good-natured horseplay, pun intended, has been the norm at the farm.

“We joke around with our blacksmith and our vet. We say, ‘Hey… remember that you’re dealing with a Hall of Famer now.’ Everyone couldn’t be happier for him.”

Every time Woods gives the trotter a pat, he thinks of the big night.

“It’s an honour to be around him and to be part of his story at Winbak,” said Woods. “That always comes to mind. So many people will share in this big night. Bob and Linda Stewart, they trained him and are the main shareholders in him. They adore this. When I called them to let them know he got in, they were so happy. I came into a great situation here, taking over from Larry Drysdale.”

Angus Hall makes it that much better.

“To be able to work with horses like this is a true pleasure. He shuffles around like a little old man now, but he’s in good health. He still carries himself like a proud horse. He’s like a distinguished older gentleman.” 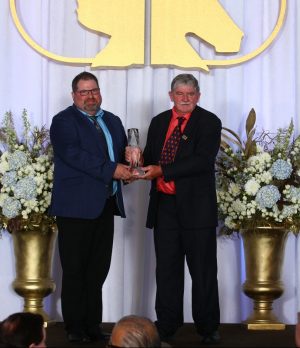