In 1983 an unrivalled performance by All Along, a 4-year-old French-bred mare, placed her name among the greats of thoroughbred racing. Her herculean feat of capturing four major turf events, one in Europe and three in North America during  a span of 41 days against the leading grass horses in the racing world will undoubtedly never be matched, or even attempted.

Her triumphant campaign, one that would earn her the accolade of being “one of the top fillies in the last part of the 20th century,” began in October in Paris at Longchamp in the Prix de l’Arc Triomphe, Europe’s richest and most prestigious thoroughbred event. Trailing for much of the mile and a half race, she began her charge along the rail as the field began there long run up the straight. It was an electrifying last furlong charge to the wire, which was her trademark racing style under the direction of jockey Walter Swinburn, Jr. Two weeks later she became the first “Arc” winner to ever ship to Canada. On Woodbine’s turf course in the Rothman Canadian International she didn’t make her move against 10 rivals until sweeping out of the turn for home,  galloping  past a field that included Half Ice, Nijinsky’s Secret, Majesty Prince and Thunder Puddles. She won by four lengths.

Two weeks later it was off to Jamaica, N.Y., and Aqueduct, where All Along destroyed the opposition in the Turf Classic by nearly nine lengths. With a $1 million bonus in sight if she could win all three major turf events in North America, she headed to Laurel, Md., for the rich Washington, D.C. International, which she won easily. The granddaughter of Round Table earned awards in North America that had never been presented to a foreign-based horse. She was the first filly to win an Eclipse Award as Horse of the Year, and was also Europe’s champion horse. All Along, who was owned and bred by Parisian art dealer Daniel Wildenstein, was initially trained by Maurice Zilber, but later by Patrick Biancone.

At age two she won her only race at a French provincial track, but at three won three stakes races, often exhibiting her patented late kick. An apparent dislike for soft turf saw her place second in the Prix Saint-Alary and fifth in the English Oaks at Epsom.  However, All Along rebounded in a big way at St. Cloud, winning over older horses. The big filly showed her true stuff in the Prix Vermeille, defeating a strong field that included Akiyda, who went on to win the “Arc” that year. A second place finish in the Japan Cup in Tokyo was her final start prior to her incredible 1983 award winning campaign.

The bay mare concluded her superlative career in the inaugural Breeders’ Cup Turf at Hollywood Park, finishing second to longshot Lashkari. In 21 starts she won nine races and was the all-time leading distaffer in terms of career earnings with $3,018,420 when she was retired to the broodmare barn at Three Chimney Farms in Midway, KY.  She was inducted into the National Museum of Racing and Hall of Fame at Saratoga, N.Y., in 1990. 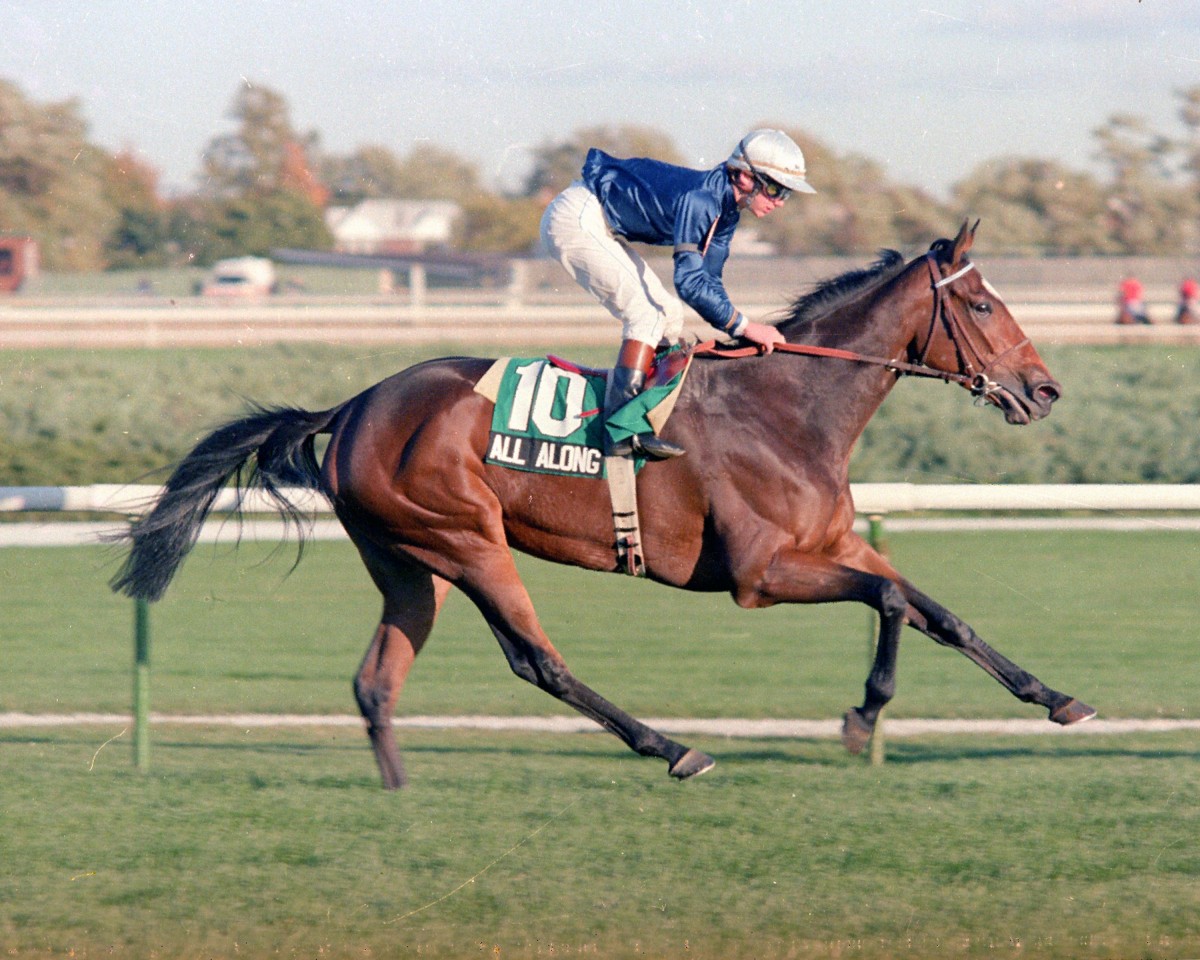