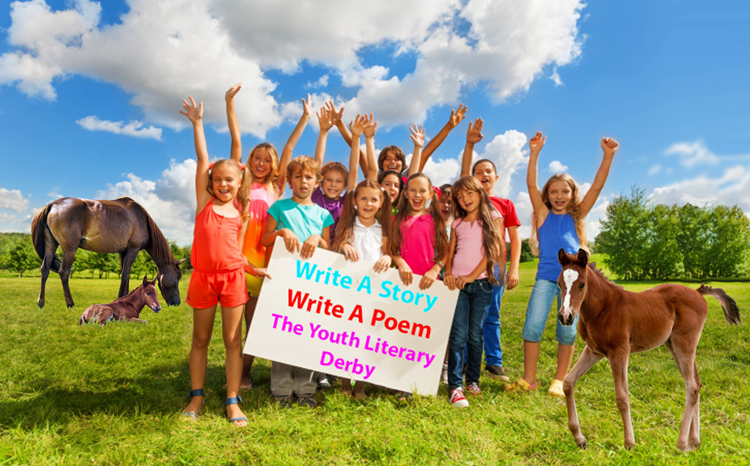 There is a hot new Derby in town that will sweep across the Ontario landscape in 2018.  It involves Ontario students and the Ontario Standardbred breeding industry.
It is  the Youth  Literary  Derby.
The Youth Literary Derby is a juried,  horse-themed writing contest carrying $2,000 in prize  money. It is   designed to encourage writing and literacy skills and  reaches out to horse-loving kids with a literary flair and into the province’s education system.  It challenges students’ evaluations and perceptions of one of  God’s most beautiful creations  and their abilities to capture  in prose and verse their up-close encounters with Standardbred foals and the unspoken bond between man and horse  that has existed  through the years.
To quote Winston Churchill:   There is something about the outside of a horse that is good for the inside of a man.”
The Youth Literary Derby  challenges  the educational system to draw the attention of today’s youth  beyond the world of computers and into the world of nature, and the  horse,  that  has had a major impact  on the history and development of this planet.
There are over 30 Ontario  Standardbred nurseries waiting to greet  aspiring young writers  during the  foaling season in April and May before they plunge into their literary endeavours.     The program  is  designed for Ontario-resident students in Grades 5 through 8 with divisions for poems and essays. The deadline for submissions is June 15th.
The  Youth Literary Derby  is patterned  on  similar, successful contests staged during the golden days, and nights,  of  Canadian harness racing by industry publicist,  bill galvin.  The poplar contests attracted   mainstream media attention including national television  and generous print media coverage in major Canadian  newspapers, and beyond.
“It was a life changing encounter for me” said  Barbara Dutchyn,  who, at age 10,  nosed out 614 contestants from  Grand Isle, Newfoundland to Bluffton, Alberta to  capture the 1970 Poetry Derby for Kids sponsored by the publicity department of the Ontario Jockey Club (now Woodbine Entertainment).    Barbara, a sixth -grade honour student, was the pride of her St. John Fisher School in Niagara-on-the-Lake, Ontario when she read her taped,  prize-winning poem on national television surrounded by her schoolmates and proud teacher. “It was the one if the proudest and most memorable times in my life.” she said.
Although  provincial school boards are being contacted and made aware of the Youth Literary Derby,  interested students are encouraged  to contact their teachers and principals to reinforce their interest in the program.
The 3-1/2 minute long video on the program’s website www.YouthLiteraryDerby.ca about the early minutes of a Standardbred foal’s life and its various stages of development is a must see. The touching video was produced by the award-winning Woodbine Broadcast Department team
WHO ARE WE ?
The organizers and managers of the Youth Literary Derby  are a small,   non- profit  and independent group of industry volunteers dedicated to promoting the Standardbred horse and Harness racing and receive non- monetary, promotional   support from  our partners:
OUR PARTNERS:
Equine Guelph (University of Guelph)
Ontario Equestrian
Mississauga Arts Council
Woodbine Broadcast Department
Six Nations Council
Standardbred Canada
Mississauga Library System
Ontario Harness Horse Association
Canadian Horse Racing Hall of Fame
Standardbred Breeders Association of Ontario (SBOA)
Writers and Editors Network (Toronto)
Mississauga Writers Group
United States Harness Writers Association (Canadian Chapter)
OUR TEAM
Bill Galvin,  industry publicist
Karen Hauver industry executive
Andrea Pietrzak, Harness Racing Writer/Journalist
Ruleen Lilley, Owner,  breeder and Standardbred promoter
Kathy McBride, Owner-trainer and  Standardbred breeder
Ann Straatman:  Owner-manager Seelster Farms
Dr. Sarah Tiller, Veterinarian
Dean Leifso, Lawyer and race track  executive
For full contest details on the Youth Literary Derby, go to : www.YouthLiteraryDerby.ca