German harness driver Hans Frömming, was a world Record Holder, a globe-trotter and most importantly a goodwill ambassador for the German trotting sport. In March 1975 he travelled to Toronto’s Greenwood racetrack for a driving contest against Canada’s Herve Filion, and left a silver-tipped whip with harness racing promoter and Canadian Horse Racing Hall of Fame honoured member Bill Galvin, as a souvenir of that visit.

When Galvin travelled to Germany this past summer to attend the German Trotting Derby, at the historic Berlin-Mariendorf race track on August 6th, 2017, a race won by German drivers Hans Frömming eleven times, and Heinz Wewering eight times, he carried that whip in his luggage as a symbol of the international bond within the sport of harness racing and to return it to the German trotting fans.

Hans Frömming was the most popular driver of trotting horses in Germany. With 5,592 wins he was the leading dash winner in the world. Heinz Wewering was his successor. He has been Germany’s dash winning champion for 29 years and won four European and two World Championship titles ,recording over 17,000 wins Hans Frömming and Heinz Wewering are both members of the German Hall of Fame of the Trotting Sport, and it was fitting that 40 plus year old memorabilia item of Hans Frömming should be preserved in the German Hall of Fame. Both German driving aces are well known in America, too. Hans Frömming drove the legendary Delmonica Hanover for American colours to a stunning victory in the 1974 Prix d’Amerique. Heinz Wewering claimed a sensational fourth place with Toss Out in the Hambletonian Final 1993. As the leading dash winner of all time he always stood in competition with America’s best drivers. Heinz Wewering’s predecessor as World Record Holder was Herve Filion, and his successor is Dave Palone.

That began as a simple return of memorabilia grew into an international exchange when Heinz Wewering in turn presented Bill Galvin with two whips signed by Wewering. The circle of the exchange was completed when Tom Hicks, a prominent owner and breeder of standardbreds for 40 years and 2016 USHWA Member of the Year, and who provided initial introductions between Galvin and the German representatives to co-ordinate the whip exchange, presented one of the Wewering whips to the Harness Racing Museum in Goshen, NY, USA and Bill Galvin presented the other whip to the Canadian Horse Racing Hall of Fame in Toronto, ON, Canada. 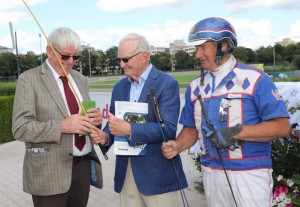 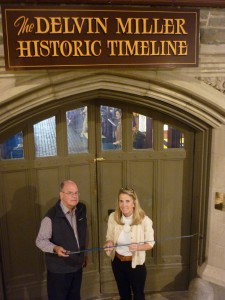 September 13, 2017— Tom Hicks, prominent Standardbred breeder/owner and 2016 USHWA member of the year presents Janet Terhune, Director, Harness Racing Museum & Hall of Fame with a Wewering whip in the US leg of the exchange. 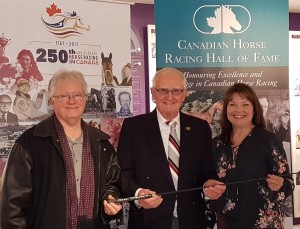