David Heffering said his first reaction upon hearing the news that late great pacing stallion Mach Three was a first-ballot Canadian Hall of Famer was incredible joy for the Muscara family that owned the horse that died tragically in January of 2017.

“They’ve been in the business for a long time and have loved the horse business,” said Heffering, owner of Tara Hills Stud in Port Perry, ON where Mach Three stood for 14 straight years during the northern hemisphere breeding season. “The father loved the horse business. He just ate and slept the business for all of the years that I knew Joe Muscara, Sr. So it’s nice that this will add to the legacy for the boys, for Bob and Joe, Jr.”

Mach Three — the sire of the legendary Hall of Fame racehorse and stallion Somebeachsomewhere ($3.2 million, 1:46.4 world record) —  died Jan. 20 at Alabar Farms in Waiau Pa, New Zealand following a paddock accident. He had just turned 18. Mach Three suffered a broken leg in his paddock and had to be put down. 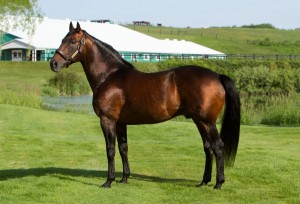 “He’s been a big part of the Canadian breeding scene and the North American breeding scene,” Heffering said. “He made racehorses. That’s what everybody tells us. You can breed to him and you’ll get a racehorse.”

The late Joe Muscara, Sr. of Huntingdon Valley, PA purchased Mach Three in May of the pacer’s sophomore season from Linda Magid of Cambridge, ON, the widow of the pacer’s breeder, Karl Magid. Karl was perhaps best known for founding the famed Lulu’s Roadhouse in Kitchener, ON in 1984. Lulu’s, which Karl owned until 1987, was a mammoth nightclub that occupied the site of a former K-Mart and once was home to the world’s longest bar. It was also a frequent stop for some of the world’s most successful popular music acts.

Mach Three posted a record of 7-2-0 in nine starts at two in 2001 and won the $1.1 million Metro Pace at Woodbine in 1:51.4 while under the tutelage of Brett, Shawn and Bill Robinson, along with Monte Gelrod. The Metro victory came seven months after Karl Magid died of cancer.

Mach Three stood his entire career at Tara Hills Stud in the northern hemisphere and Alabar in the southern hemisphere. His first foals hit the ground in 2004.

Heffering said Mach Three is the fourth Hall of Fame member tied to Tara Hills Stud, including his late father, Peter Heffering, the Tara Hills founder that was inducted as a builder in 2010. Tara Hills now has had three stallions inducted, counting Mach Three. Kadabra was enshrined in 2012 and Precious Bunny was inducted in 2004.