In this the 250th Anniversary of Horse Racing in Canada, the CHRHF Legends Committee unanimously agreed to name a mare named Modesty, the winner of the first advertised and reported horse race on Canadian soil, as the 2017 Legend Honouree.

The official unveiling of the display panel for Modesty, who won the historic race held on the Plains of Abraham on July 1st, 1767, took place at a reception the evening of May 17th  in the Canadian Horse Racing Hall of Fame. 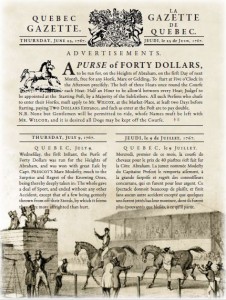 An advertisement in the June 25, 1767 issue of the Quebec Gazette called for entries for a horse race scheduled to take place July 1 for a purse of $40 to take place at “Five O’clock in the afternoon Precisely:  The best of three heats, once around the course each heat.”

Results of the race were announced in the July 9th issue of the same publication as follows:  “The purse of $40 was won with greatest ease by Captain Prescott’s Mare Modesty. It was termed an upset, “much to the discomfiture of those, who purporting to know about such things, had wagered against her and were thereby parted from their money. The contest did afford much pleasure and there were no accidents save that some few riders were thrown from their mounts, from which circumstance it appeared that they suffered more fright than injury.”

It is from this race, held 100 years to the day before Canada’s Confederation that all horse racing in Canada has evolved, bringing us to this tremendous 250th anniversary and celebration in 2017.

The Legends category of the Canadian Horse Racing Hall of Fame was originally established in 2000 as a millennium project, created to honour the early pioneers of horse racing in Canada.  It has been carried on to help bring attention to those horses and people dating back at least 50 years before the year of recognition.

In addition to the announcement of the 2017 Legend honouree, the reception also included the unveiling of the display panels belonging to those inducted to the CHRHF in 2016 and the public introduction of the 2017 Inductees, announced earlier.  The CHRHF Class of 2017 includes Thoroughbred horses Quiet Resolve and South Ocean along with Builder Eugene Melnyk, Trainer Harold Barroby and Communicator Curtis Stock.  Standardbred honourees include Mach Three, Happy Lady and Elegantimage, as well as Trainer/Driver Blair Burgess, and Builder Dr. Gordon Gilbertson.

Induction ceremonies of the 2017 inductees will be held a Gala scheduled to take place Wednesday, August 9th at the Mississauga Convention Centre.  Tickets can be purchased by contacting 416-417-9404.