Standardbred broodmare Mystic Mistress, had a total of 16 foals with 13 of her offspring making it to the track to earn over $4.3 million in purse money with three pacing under 1:50. 10 of her progeny were sired by Hall of Fame stallion Camluck, including her top earners Mystician who won the 2010 Metro Pace and was, a winner of $1.94 million, followed by Camystic, a multiple stakes winner with more than $779,000 banked on the track. Both of those horses have moved on to stallion careers.

Mystic Mistress was featured in the CHRHF’s 2016 “So God Made A Racehorse” calendar with her 2012 foal, her fourteenth, named Queen Fourteen. Fittingly the verse accompanying the photo reflected on a job Mystic Mistress did so well. 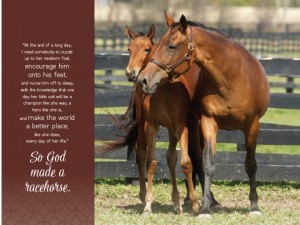 “At the end of a long day, I need somebody to nuzzle up to her newborn foal, encourage him on to his feet, and nurse him off to sleep, with the knowledge that one day her little colt will be a champion like she was, a hero like she is, and make the world a better place, like she does, every day of her life.”

The CHRHF extends our condolences to the connections of Mystic Mistress including Bru Mar Rich Stables, Ottawa, ON-Edward J Howard, Greenfield Center, NY and Warrawee Farms where she spent the majority of her years as a broodmare.

Additional details about Mystic Mistress can be found at: https://www.canadianhorseracinghalloffame.com/2012/08/05/mystic-mistress/