We extend our sincere condolences to the Kopas family on the passing of CHRHF honoured member, Jack Kopas, following a brief illness. Involved in the sport since 1942, the native of Lumsden, Sask., born in 1928, decided very early in life he wanted to be a horseman. In fact, he celebrated his sixteenth birthday as a groom on the backstretch of New York’s Roosevelt Raceway. Like most of the greats, Jack spent his share of time apprenticing. Perhaps the most influential time he spent was with the legendary Hall of Fame inductee Clint Hodgins. In 1958, Kopas and his wife, Alice, set up shop on their own. They moved their operation to Trois Rivières, Que., where they operated a public stable for several years before moving to Ontario, where they established their home and a stable just north of London in Ilderton.

The first horse to make the Kopas name a household word was Super Wave, the free-for-all pacer he campaigned for owner Dr. George Boyce of London. Super Wave, a son of Shadow Wave, was inducted into the Hall of Fame in 2002.

We were honoured to have Mr. Kopas participate in a Hall of Fame event held at Mohawk Racetrack in the summer of 2015, sharing stories with fans and fellow Hall of Famers. 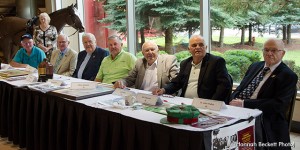 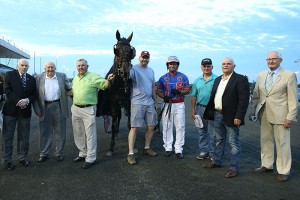 Additional information about Jack Kopas’ career in horse racing can be found here.