Our entire nation will be celebrating 150 years of confederation in 2017, but for Canada’s horse racing industry, this year represents an even bigger anniversary, the 250th Anniversary of our great sport in this great land.

On July 1, 1767, exactly 100 years before our country’s confederation, a race took place on The Plains of Abraham in Quebec City.  Gazette de Quebec recounted the race as follows:

“The horse race for a purse of forty dollars was held on Wednesday, first of the month, on the Hill of Abraham.  It was easily won by Captain Prescott’s mare Modesty, much to the discomfiture of those who, purporting to know about such things, had wagered against her and were thereby parted from their money.”

From that day forward horse racing has been part of the fabric of our country.  From coast to coast, for generation after generation, people from all walks of life have participated in and enjoyed the sport, whether on grass-root tracks, at agricultural fairs, on frozen rivers dotting the countryside, or in today’s modern facilities.

Wagers have been made, crowds have cheered, champions have been crowned.

The Canadian Horse Racing Hall of Fame is partnering with the Canadian Thoroughbred Horse Society, and Standardbred Canada to create a series of celebrations of this spectacular milestone throughout 2017.

Today we announce the launch of the ‘250 miles for 250 years’ initiative and 250th Anniversary of Horse Racing in Canada funding campaign. 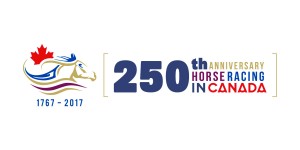 Miles in honour of the 250th Anniversary could include:

In order to make this a truly national celebration, we need your help to fund the initiatives.  To date industry associations HBPA Ontario, COSA, Harness Racing BC and the Canadian Horse Racing Hall of Fame have agreed to contribute funds to the 250th Anniversary efforts and we are working with other industry organizations across Canada to help meet our fundraising goals.  We invite you to take a look at how you can become a 250th Anniversary of Horse Racing Celebration supporter as a sponsor or by making a tax deductible donation. Follow this link for complete details.

Watch for upcoming announcements for details of local launch events at racetracks across Canada.