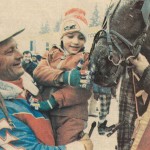 Thirty eight years ago today, February 4, 1979, Prime Minister Justin Trudeau, then just seven years old, and his father, Prime Minister Pierre Trudeau, and brothers Michel and Alexandre (Sacha), were among some 40,000 hardy souls who lined the banks of Ottawa’s Rideau Canal in sub-zero weather to witness the first major ice racing in Ottawa since trotting races were staged on the frozen Ottawa River in the shadows of the parliament buildings in 1898.

Remembered as an iconic day in Canadian horse racing history, the event was a blockbuster promotion for the sport with live national television, radio and print media exposure, including generous coverage in prestigious Sports Illustrated with readership reaching the 10 million mark, and in Air Canada’s Enroute Magazine, that was carried in all of their planes around the world.

Tourism Ottawa reported that 96 journalists covered the event that drew spectators from across the country and the eastern U.S. states. It also noted the event brought over a million tourism dollars to the Ottawa economy. A significant number at the time.
Legendary U. S.  Hall of Famer Stan Bergstein described the event as a “major promotional coup and ice racing extravaganza on the frozen canals of downtown Ottawa that made full use of the history, drama and colour of harness racing, and staged with full civic and governmental cooperation.” 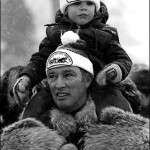 The ice races were the feature attraction of the inaugural of the now famous Winterlude festival staged each year by the National Capital Commission in Canada’s capital.
The National Capital Commission, who manage all activities on the canal granted special permission to stage the event. It was the first time that horse racing was allowed on the canal, a National Historic landmark and World Heritage site, and the longest skating rink in the world.

Environment Canada records indicate the temperature on that frosty day was minus 11 celsius with 2.4 cm of snow falling during the afternoon. The total snow already on the ground measured 39 cm. 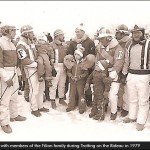 A Who’s Who of North American horse racing, along with the thousands who lined the canal banks, attended this unique re-creation of a century-old tradition of early Canadian horse racing. Joining the Trudeau family on the slick, smooth ice of the canal, were, provincial premiers, a justice of the Supreme Court of Canada, show business personalities, hockey legend Bobby Hull, and some of Canada’s leading reinsmen, including Herve Filion, John Chapman, Yves Filion and Ron Waples, who are presently enshrined in the Canadian Horse Racing Hall of Fame.
As it turned out, the day also featured a rare appearance from a Prime Minister, and a future Prime Minister.
February 4, 1979, truly a gargantuan day to remember in the 250-year storied history of Canadian horse racing.