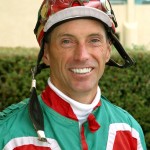 Beyond the tributes, remembrances and congratulations that are deservedly pouring in, the obvious question in the wake of Russell Baze’s retirement will be whether or not his daunting North American record for wins as a jockey will ever be eclipsed. The 57-year-old rider’s final career victory on June 11 at Golden Gate Fields—fittingly, on a horse named Vow to Be Tops (Broken Vow)—put Baze’s lifetime win mark at 12,842.

Considering that Prado is 49 and has ridden 100 winners annually but once in the past five years, Baze’s record seems safe for the foreseeable future. The other active North American jockeys on the sport’s top 20 lifetime wins list also have lots of work to do to catch up: Mario Pino (6,720), Perry Ouzts (6,606), Kent Desormeaux (5,745) and John Velazquez (5,529).

On a global scale, 55-year-old South American jockey Jorge Ricardo, who is believed to be within 100 wins of Baze, remains active, although his exact number of lifetime wins could not immediately be determined.

But another question—more aesthetic than statistical—goes hand in hand with Baze’s lofty career win mark. Once he became established as a jockey, Baze made a decision to firmly root himself in Northern California, where he reigned supreme for parts of five decades riding primarily at Golden Gate Fields, the now-defunct Bay Meadows, and on the Northern California fairs circuit. Even while building a Hall-of-Fame career, he opted to remain close to his family on a daily basis rather than travel the country to chase the allure and fame of big-name races. This is often oversimplified as a “big fish/small pond” type of argument. But it would be a mistake to discredit the nobility that goes into any decision that involves looking out for the best interests of one’s spouse and children.

So with North American race dates shrinking, the number of annual races in a freefall, and entire circuits dropping off the grid entirely, will jockeys in the future be able to choose to remain in one place to build decades-long portfolios of accomplishments? Will the next generation of riders like Gall (who rode primarily at Fairmount Park near St. Louis), Ouzts (who currently rides the mid-level tracks in Ohio and Kentucky), and Carl Gambardella (a retired stalwart of the defunct but gritty New England circuit) be able to achieve top-20 lifetime rankings while competing close to home?

“There are plenty of places that it is difficult to ply your trade and maintain that strong commitment to raising a family correctly,” said the retired McCarron, who is well established in his post-riding career as a mentor for young jockeys. “But it all depends on the region that the jock is riding. If you’re in New York, you can ride there all year long. If you’re riding in Maryland, Southern California, Northern California, south Florida—same thing. There, you can do the right thing by your family to raise them and be there for them.”

But on many other circuits, achieving that balance isn’t so easy. Just off the top of his head, McCarron cited a number of former major-league racing regions—Chicago, Boston, even the geographically fragmented nature of Kentucky racing during the summer months—where year-round riding opportunities have dwindled since his own retirement in 2002.

For the record, McCarron doesn’t think Baze’s North American lifetime wins mark will ever be broken. But he added that “it’s like any other sport, you have to put it all in perspective.”

McCarron gave the example of how professional basketball scoring records changed dramatically in the 1970s because of the increase in games scheduled. Now nearly 40 years later, the sport is going through another statistical metamorphosis because of the explosion of three-point scoring that did not exist in that earlier era.

Pincay, who was the continent’s winningest jockey until Baze overtook him by recording career victory 9,531 on Dec. 1, 2006, also said he can’t see the North American record being cracked.

“Not in my lifetime, that’s for sure,” Pincay said with a laugh. “To tell you the truth, I think that record is going to stay forever. The changes in the game that [McCarron] mentioned are one reason, but I don’t think any other rider is ever going to win 12,000 races, or even come close. Just thinking about getting to 10,000, it’s almost unheard of.

“Russell was a great competitor. He was the kind of guy who was born to ride horses, and he loved doing what he was doing. You don’t see too many guys like him—always there, he lasted so long, always working, always trying to win, and pleasing everybody. I congratulate him. He left a legacy that is going to be very hard to be surpassed. I admire him not only for what he did and his work ethic, but for being a good man and a good family man.”

Pincay continued: “He wanted to be close to his family, and that’s the choice that he made. But I guarantee you that if he would have decided to come [permanently] to Southern California and make it over here, he eventually would have been a top rider. There’s no question about that.”

McCarron agreed: “If he had stuck it out [in SoCal], he definitely would have made it down there. There’s no doubt in my mind. He’s a world-class rider. Russell Baze and Laffit Pincay I believe are cut from the same cloth. Both of those guys have the most incredible dedication to their craft that I’ve ever seen in my life. Russell rode a $3,000 claimer like he was riding a $3 million race. And I have the utmost respect for that kind of approach to his job. I cannot say the same thing for myself. I rode a lot of horses that I really didn’t want to be on their backs. But whether Russell wanted to be on their backs or not, he went out there and gave his all every single time. And for that he’s got to be admired.”

Such admiration extends beyond Baze’s peers in the jockeys’ room.

“Each and every individual has to do what they’re comfortable with,” said trainer Jerry Hollendorfer, who partnered with Baze for numerous trips to the winner’s circle. “Russell has enough guts and enough brains to do what makes him happy and not listen to what everybody else says, so that contributed to his success. He’s a real happy person most of the time, probably because he made a choice [about calling the NoCal circuit home] and stuck with it.

“Most of my relationship with Russell has been a business relationship,” Hollendorfer continued. “We’re friends too, but we both have the same kind of attitude toward getting the job done; we both know we have to do a lot of work and preparation. And because of that, we ended up doing very well together. We trust each other. I’ve been very loyal to Russell, and he to me. I think it’s out of respect that both of us do that.”

When McCarron hung up his tack 14 summers ago, he retired as North America’s all-time money-winning rider. Currently he ranks sixth on that list, but he recalled the satisfaction of making the decision to go out on top while still healthy.

“I’m thrilled Russell decided to walk away on his own accord,” McCarron said. “For the rest of his life, he’s going to be able to say that he was the No. 1 rider.”