Regarded as North America’s dominant thoroughbred on the turf, the chestnut gelding defied pundits while also winning stakes races on the dirt and synthetic surfaces during a career which earned him an unprecedented collection of awards. Owned and bred by Morton Fink of Chicago and trained by Charles Lopresti, Wise Dan became the only horse to win three Eclipse Awards in both 2012 and 2013. He was American Horse of the Year, Champion Older Male and Champion Male Turf Horse.

Unraced as a two-year old, Wise Dan captured nineteen graded stakes races. His 23 wins in 31 starts earned $7.5 million.  He twice won the Breeders’ Cup Mile on the turf, but also set a track record on Keeneland’s Polytrack in the Ben Ali Stakes. On Tapeta footing he won the Presquile Isle Mile.  His most impressive start on the dirt came in 2011 when he won the Clark Handicap  at Churchill Downs. 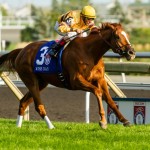 Wise Dan is best known locally when he became the first horse to win back to back runnings of the Woodbine Mile – 2012-‘13. In winning his ninth consecutive race, he set a record on the E.P. Taylor course.  Over a yielding Churchill Downs turf course he didn’t disappoint bettors while stretching out to win the Turf Classic at 1 1/8 miles. As a 3-year-old he twice won at six furlongs, registering a 15-length maiden race triumph and the Phoenix Stakes at Keeneland.

Injuries hampered his career in 2014 at age seven. He began the season with stakes wins in the Marker’s Mark and the Woodford. In May he underwent emergency surgery for colic with a twisted intestine. Later that season, after winning the Bernard Baruch at Saratoga and the Shadwell, a non-displaced fracture at the bottom of the cannon bone send him to the recovery barn. While training in 2015 to get ready for his third successive win in the Woodbine Mile he developed a tear on the outside edge of his tendon and was retired.  Lopresti said, “He could have won that race. But at what cost? What if he really got hurt doing it? You could tell he was mad. He had a different demeanor, like he was saying, “What’s wrong with you? I could beat those horses on three legs! I’m not hurt that bad.”