The Canadian Horse Racing Hall of Fame is pleased to announce its 2016 Legend Honourees.  Initially launched as a millennium project, the tradition of honouring Canadian racing legends continues as we acknowledge people and horses whose accomplishments were achieved more than fifty years ago.  The Canadian Horse Racing Hall of Fame will honour these deserving legends at the CHRHF President’s Reception scheduled to take place in the Hall of Fame on Wednesday, May 18 at 4:30 pm.  The reception will also feature the official unveiling of the display boards for the 2015 inductees, as well as the introduction of the 2016 inductees. 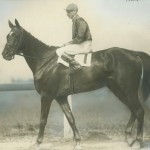 He was known as “Old Bones”, a moniker the chestnut gelding was bestowed by his affectionate fans.  Some also called him “The Galloping Hat Rack” or “Old Slim”, based on his tall, scrawny, angular appearance. A writer said “he never won a beauty contest, and certainly did not dazzle in any confirmation photos, but on the track Exterminator was the gritty hero of Thoroughbred’s Golden Age of the ‘20s.”

In 1918 he shocked bettors by winning the Kentucky Derby at odds of 30-to-1, the longest shot on the board. The Derby was one of Exterminator’s record 34 stakes victories during an eight-year career that began in Kentucky and Windsor, Ont., and ended in 1924 in Montreal. In his 99th career start the 9-year old gelding pulled up lame. He left a legacy that would never be forgotten, winning 20 times while carrying 130 pounds or more.

As he aged he became one of racing’s most popular warriors.  At five he set two world records, winning the 1 ¾ mile Saratoga Cup and the two-mile Autumn Gold Cup at Belmont. He was champion older male in 1920, ’21 and ’22.  Foaled in 1915 at Almahurst Farm, Ky., Exterminator sold for $1,500 at Saratoga’s yearling sale. By age two he was nearly 17 hands; awkward and coarse looking, prompting owner J.C.  Milam to geld him and sell him for $9,000 to Willis Sharpe Kilmer, who was looking for a workhorse to tune up Sun Briar, his 2-year-old champion and Derby favorite.  Sun Briar didn’t train well and Kilmer, under the urging of Churchill Downs president Col. Matt Winn, reluctantly entered the horse he called “the truck horse” or “the goat” for the Derby.

In 1924 the gallant old warrior limped off the track after finishing third at Dorval.  Two weeks earlier he notched his 50th and final victory at Blue Bonnets. During his career Exterminator made four starts at Woodbine, winning the Autumn Cup three years in a row while toting between 132 and 137 pounds. He was assigned 134 pounds in the 2 ¼ mile Ontario Jockey Club Cup, which he won handily over a muddy track. “Old Bones” campaigned 13 times in Canada. He died at age 30 and was buried next to his old stable mate Sun Briar. In 1957 he was inducted into Saratoga’s Hall of Fame. 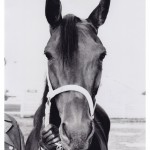 Bred by Clermont Veilleux of Drummondville, Quebec and raced under the ownership of Ecuries Drummond Stables, Woodlawn Drummond made quite a mark for herself in the mid-1960s. In 47 career starts she posted 22 victories and earned $128,592.

The bay pacing mare, driven throughout her career by CHRHF member Keith Waples, raced at tracks in Ontario, Quebec and New York State from the age of two through her four-year-old year, often competing against and defeating the best colts of the time.

In 1964, at the age of two, she tallied a record of 8-0-0 in 14 starts, including wins in the Canadian Series Stakes at Greenwood Raceway, Connaught Park, Richelieu Park, where she set her  two-year-old mark of 2:06, Trois-Rivieres and Quebec. 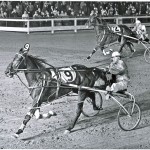 The game mare’s best year on the track was as a three-year-old, when she twice defeated Balenzano who was later voted Harness Tracks of America’s Three-Year-Old Pacing Filly of the Year.  It wasn’t just the fillies she dominated, as she also defeated colts Perfect Wave, Fleet Time, Keen Freight, Jerry Hal and Adios Watts on her way to record stats of 12-4-2 in 18 starts for earnings of $78,312 and a lifetime mark of 2:02.1 which she reached three times that year.   Her year concluded with a win in the Lady Maud Stakes at Roosevelt Raceway and being voted the Canadian Trotting Association’s Three-Year-Old Pacer of the Year.  Other stakes race wins at three included the Ladyship Stakes at Goshen, NY; La Quebecoise Stakes, Dottie’s Pick Stakes and Gaspe Futurity at Richelieu Park.

Woodlawn Drummond concluded her racing career at the end of her four-year-old season after competing against the best older pacers in North America including Bret Hanover (five times), Adios Vic and Cardigan Bay. She managed a solid third place finish in Canada’s oldest harness stakes event, The Canadian Pacing Derby, at Greenwood Raceway, behind H A Meadowland and Timely Knight.  Her year was highlighted by a win in the Canada Pace at Richelieu Park, and a second in the Ryan Memorial at Rideau Carleton for a record of 2-5-2 in 15 starts.

The Canadian Horse Racing Hall of Fame will honour these deserving legends at the CHRHF President’s Reception scheduled to take place Wednesday, May 18 at 4:30 pm in the CHRHF located at Woodbine Racetrack.  The reception will also feature the official unveiling of the display boards for the 2015 inductees, as well as the introduction of the 2016 inductees.

The Canadian Horse Racing Hall of Fame, located at Woodbine Racetrack, Toronto, is a national organization dedicated to honouring the best in Canadian horse racing, as we preserve the history and heritage of the sport.