Two proud members of the Canadian Horse Racing Hall of Fame were front and center
in the 156th running of the Queen’s Plate, July 5th, at Woodbine. 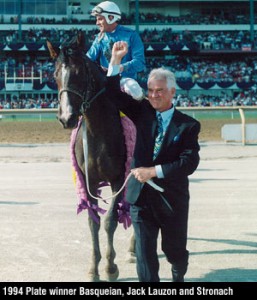 Frank Stronach an inductee in 2002 in the Builders category celebrated his third Queen’s Plate victory when his homebred colt Shaman Ghost rushed to victory at the expense of Plate Trial winner Danish Dynaformer trained by Roger Attfield, an inductee of 1999.
Stronach won his initial Queen’s Plate in 1994 with Basqueian and followed with Awesome Again 1997.  Awesome Again was inducted into the Canadian Horse Racing Hall of Fame in 2001. Stronach has been Canada’s Outstanding Owner on nine occasions and Canada’s Outstanding Breeder also on nine occasions. Attfield has been Canada’s Champion Trainer seven times and was attempting to win a recordbreaking ninth Queen’s Plate trophy.
Earlier this year American Pharoah became the first Triple Crown winner in the United Stakes since Affirmed accomplished it in 1978. Shaman Ghost seeks to become the first Canadian Triple Crown winner since Wando, a Hall inductee in 2014, who raced to victory in the Queen’s Plate, Prince of Wales and Breeders Stakes in 2003. The Prince of Wales, the second Jewel of the Triple Crown will be contested on the dirt at Fort Erie Racetrack, July 28. Roger Attfield, one has to imagine, will be eagerly awaiting a rematch with Shaman Ghost .