In 1902 a horse by the name of Harold H won a mile heat in 2:04 at Terre Haute, Indiana, to become “the fastest pacer ever bred in Canada, and along with this must go the honour of being the best and truest race horse that the Dominion ever produced,” John McCartney wrote in his report on the race to the Cincinnati, Ohio, Commercial Tribune. Despite this single achievement and a legendary racing career from 1900 to 1904, Harold H became a horse that time literally forgot for more than a century.

Harold H was bred by G. H. Leatherdale and foaled in Dresden, Ontario, in 1894. He was sired by Roadmaster and his dam was Little Belle by Brown Dick. Owned by John E Swarts and trained by Al Proctor, Harold H was six-years-old when he raced for the first time in an era when standardbreds raced multiple heats in which winners were determined on a best-in-summary basis. In his first start, at London, Ontario, on June 19, 1900, he won all three heats; the fastest in 2:20¼. A week later, he swept three heats at Hamilton, Ontario; a portent to what would become an illustrious career.

Harold H competed in 46 events during his career, including clashes with the immortal Dan Patch. Those events required a total of 145 heats to complete and he finished in the first three in 126 of them. That included 87 heats won, 27 seconds and 12 thirds which translated to a success rate of 86 per cent finishing no worse than third. In a fitting climax to his racing career, Harold H reduced his lifetime race-win record to 2:03¾ at the age of ten in his final season on the track.

He raced at 10 tracks in Ontario and Manitoba and at 20 tracks in 11 states in the U.S. stretching from Brooklyn, New York to Milwaukee, Wisconsin. His U.S. starts included Grand Circuit events and appearances at several metropolitan tracks such as Detroit, Cleveland, Syracuse, Lexington and Columbus, Ohio.

The first encounter between Harold H and Dan Patch occurred Aug. 30, 1901, at Providence, Rhode Island, with Dan Patch winning all three heats, the fastest in 2:04 3/4 while Harold H was reported to have “raced gamely.” Dan Patch repeated the performance when they next met in Harold H’s final start of that year at Memphis, Tennessee. Harold H had a faster record (2:04) than Dan Patch in mid-season of 1902, He was Canada’s fastest harness horse at the time…. and in the peak of his form. His trainer, Al Proctor, sent a telegram to Myron McHenry, Dan Patch’s trainer and driver, proposing the two stars meet in a match race at Windsor for $500 a side on July 8. The match race took place, but fizzled. The small crowd found the race disappointing, as most match races are, with Dan Patch winning decisively. ‘If Harold H wasn’t disheartened by the experience,’ it was written, ‘his owner was; the next day’s papers noted that John Swarts of Wingham, ON, had sold his pacer to the McLaren boys of Winnipeg for $8,000, probably less than half of what he could have gotten a couple of days before.’” 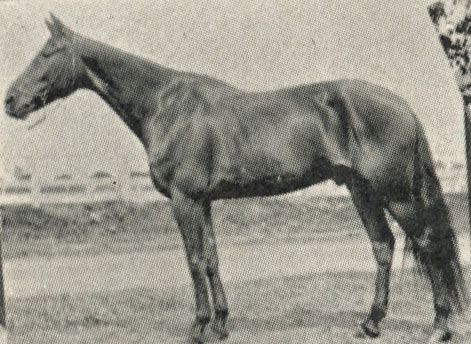