Charles “Charlie” Armstrong has been a true Icon in the Ontario and North American Horse Industry for over 60 years. Throughout this time, he has represented and participated in multiple disciplines and has been integral in the shaping of Ontario’s horse racing industry and horse industry. Armstrong Bros. Farm, the family-owned operation was founded in the 1940s by Charlie’s father Elgin and uncle Ted who were construction magnates. After Elgin’s death, Charlie, along with his wife Lenore, kept the Armstrong horse business strong.

Charlie’s love affair with horses began when he received his first pony Playboy from his uncle Ted in 1930 at the age of 11. The pony had been obtained as payment for a debt and then loaded into the back seat of the family car and taken to Brampton, Ontario.

Charlie continued building on the success of his father Elgin, who raced a young filly named Helicopter in the prestigious Hambletonian in the United States. Helicopter was victorious, becoming the first Canadian-owned horse to win this coveted title and her daughter, Armbro Flight, became one of North America’s greatest trotting mares and the foundation mare for the Armstrong Farms breeding and racing dynasty. In 1999, Canada Post issued a commemorative stamp with her likeness to celebrate her contributions.

As Chairman of Armstrong Holdings Brampton Limited, Charlie oversaw the growth of Armstrong Farms into the second largest standardbred breeding operation in North America. Over 90% of the most prestigious races in North America have had Armbro horses in the winners circle. Armbro performers have won nearly every classic event in the sport since Helicopter won the 1953 Hambletonian and has also bred the winners of nearly every classic event including the Hambletonian (Armbro Goal), the Little Brown Jug (Armbro Omaha, Armbro Operative) and the Adios (Armbro Omaha, Armbro Ranger, Armbro Animate) to name a few. They have produced scores of trotting and pacing champions including Armbro Omaha, Armbro Operative, Armbro Fling, Armbro Feather, Armbro Flight, Armbro Blush, and Armbro Fern. Armstrong Bros. have also enjoyed considerable success in the Breeders Crown series, ranking second in the breeding standings and second in the owner standings.(through to end of 2003)

The farm was one of the most progressive and profitable Standardbred operations and bred, raced and stood at stud a seemingly endless list of champions. Stallions that stood at the Inglewood Farm most recently included Island Fantasy, King Conch, Camotion, and Dexter Nukes. Other stallions over the years included Jade Prince, Dream of Glory, Carlsbad Cam, Armbro Emerson, Village Jiffy and Adios Pick who was sold and went on to become the foundation sire of Western Canada.

The family company was dispersed in 2005 but Charlie continued to enjoy international success, raising and racing standardbreds with his daughters under Village Acres Farms in Brampton, Ontario through 2010. Over the years they sent out a steady stream of top performers including Village Jig, Village Connection, Village Jove, Village Blues, Village Jiffy and Village Jericho.

Charlie was very involved in many facets of the industry; he was a director of the Ontario Jockey Club, a director of the Hambletonian Society; he received the Canadian Standardbred Horse Society’s Achievement Award in 1996, was a Wall of Fame Honoree for the Little Brown Jug in 1999, received the Standardbred Breeders and Owners Association – Van Bussell Award in 2003 and was the inaugural recipient of the Ontario Equestrian Federation’s Industry Icon in 2011.

H. Charles Armstrong passed away in September 2017 at the age of 96. 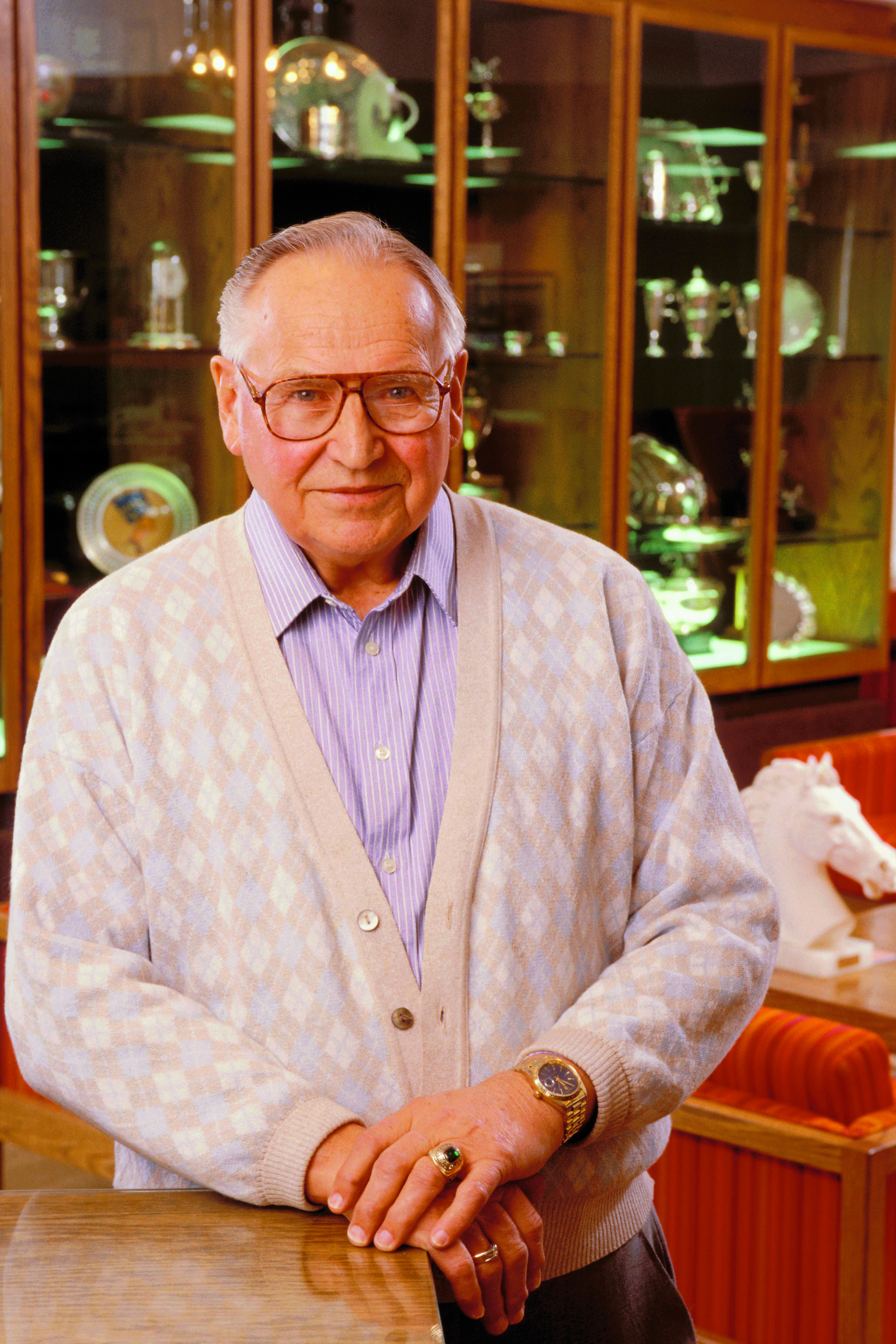