And extends an invitation for everone to come to the Awards Party! 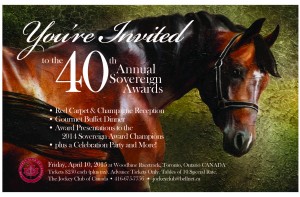 The Jockey Club of Canada will host the 40th Annual Sovereign Awards Party to honour the Canadian Champions of 2014 and to celebrate Thoroughbred racing in Canada on Friday, April 10, 2015 at Woodbine Racetrack in Toronto.
The cocktail-attire celebration awards party will include an opportunity to walk the Sovereign Award Red Carpet upon arriving at the “bubbly” reception followed by a buffet-style gourmet dinner and the presentation of the Sovereign Award Trophies to Canada’s racing Champions of 2014 and Canada’s 2014 Horse of the Year.
Even if you are not a finalist, you’re invited to come and have fun and celebrate with the Champions of Thoroughbred Racing in Canada.
This year’s event will once again be held on the eve of the start of Thoroughbred racing in Canada with Woodbine Racetrack’s 2015 Thoroughbred season beginning the next day at 1:00 pm (EST), Saturday, April 11

.
Tickets to the 40th Annual Sovereign Awards Party are $250 each and tables of 10 are slightly discounted at $2400. All tickets are plus applicable taxes and must be reserved in advance by contacting The Jockey Club of Canada at 416-675-7756 or email: jockeyclub@bellnet.ca
In an effort to promote equal opportunity in determining the winners for 2014 in the 17 race award categories, the voting began January 2, 2015, allowing for statistics for the entire 2014 year to be considered. To be eligible to receive a Sovereign Award in each divisional category a horse must have raced in Canada at least three times for all horses three years-old and up and two times for all two-year-olds. For the Owner, Trainer, Breeder, Jockey and Apprentice Jockey categories, a minimum of 10 starts in Canada must be made. The Outstanding Broodmare Award is a lifetime achievement award. The mare must have a Canadian-bred Stakes horse (by, definition, the horse must have come first, second or third in a Stakes race) in the current year and must have produced a different Canadian-bred stakes horse in a previous year.
Follow this link for a PDF of the complete Sovereign Awards Eligibility, Selection and Distribution Guidelines:
https://www.jockeyclubcanada.com/wp/wp-content/uploads/2014/12/2014-SA-Eligibility-Selection-and-Distribution-Guidelines.pdf
Once again the Jockey Club of Canada is announcing the top four finalists in each category as determined by the online ballots of 40 knowledgeable voters across Canada and in the United States.
The 2014 Sovereign Award Finalists, listed alphabetically in each category, are:
Champion Two-Year-Old Filly:
Brooklynsway
Conquest Harlanate
London Tower
Mississippi Delta
Champion Two-Year-Old Male:
Conquest Tsunami
Conquest Typhoon
Decision Day
Phil’s Cocktail
Champion Three-Year-Old Female:
Executive Allure
Lexie Lou
Paladin Bay
Sweater Weather
Champion Three-Year-Old Male:
Ami’s Holiday
Coltimus Prime
Florida Won
Heart to Heart
Champion Older Female:
Hillaby
Silent Star
Spring in the Air
Strut the Course
Champion Older Male:
Calgary Cat
Lukes Alley
Sharp Sensation
Sky Captain
Champion Female Turf Horse:
Deceptive Vision
Executive Allure
Lexie Lou
Royal Fury
Champion Male Turf Horse:
Dynamic Sky
Excaper
Heart to Heart
Sharp Sensation
Champion Female Sprinter:
Cactus Kris
Executive Allure
Hillaby
Spring in the Air
Champion Male Sprinter:
Calgary Cat
Excaper
Phil’s Dream
Sharp Sensation
Outstanding Broodmare:
Cruising Kris
Eye of the Sphynx
Star Guest
Uproar
Outstanding Breeder:
Adena Springs
Paradox Farm Inc.
Sam-Son Farm
William Sorokolit
Outstanding Owner:
Gary Barber
Conquest Stables, LLC
John C. Oxley
Sam-Son Farm
Outstanding Trainer:
Josie Carroll
Mark Casse
Brian Lynch
Greg Tracy
Outstanding Apprentice Jockey:
Damario Bynoe
Sheena Ryan
Ericka Smilovsky
Nick Webb
Outstanding Jockey:
Luis Contreras
Eurico Da Silva
Patrick Husbands
Rico Walcott
The three finalists for 2014 Horse of the Year honours will be announced on the evening of the awards ceremony.
Media Award Categories:
The judging for the 2014 Media Sovereign Award categories will be performed by the Journalism Professors at Humber, School of Media Studies & Information Technology, in Toronto, Ontario. The three finalists in each of the three media categories will be announced the week of February 23.
The Jockey Club of Canada was founded in 1973 by E.P. Taylor to serve as the international representative of the Canadian Thoroughbred industry. The mission of The Jockey Club of Canada is to promote and maintain a high standard for Thoroughbred racing and breeding in Canada at a level which is recognized internationally for the benefit of all those interested in the sport including the general public by operations and services such as, but not limited to: evaluating all Graded, Listed and Black-type races in Canada annually; conducting the annual Sovereign Awards for outstanding achievement in Thoroughbred racing and breeding in Canada; maintaining a field office in Canada for the Jockey Club of the United States and the Jockey Club Registry Service; and by representing Canada as a Member of the IFHA.