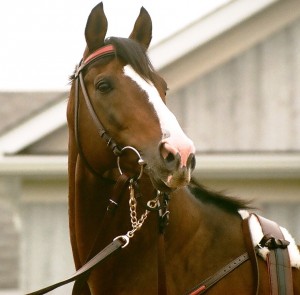 The Canadian Horse Racing Hall of Fame is very pleased to announce that we will be offering a stallion season to Sligo Bay (IRE) as part of the live auction at the 2014 Induction Gala on August 6, 2014. The season was generously donated by Adena Springs owner and CHRHF Builder, Frank Stronach.

This handsome sire is by Sadler’s Wells, one of Northern Dancer’s most prolific and successful sons – only Danehill has sired more stakes winners than Sadler’s Wells.

As 2014 is the 50th anniversary of Northern Dancer’s 3-year-old campaign, it is fitting that we are celebrating the most successful sire of the 20th century with a season to his grandson, Sligo Bay. He is a very typical Sadler’s Wells/Northern Dancer line stallion and many of his foals offer the same quality and elegance typically found in that sire line.

The 2014 Queen’s Plate and Woodbine Oaks winner, Lexie Lou, is by Sligo Bay. The filly whittled down her male peers to win the $1million Queen’s Plate Stakes 3 weeks ago.

60% of Stakes winners are Graded winners

In 2013: #1 active sire by North American 2YO Avg. Earnings/Starter

The Canadian Horse Racing Hall of Fame would like to take this opportunity to thank Andy Stronach and Dermot Carty for their support.

To order tickets, or donate to items to the live or silent auction, contact Linda Rainey – 416-417-9404 or by email at linda.rainey@canadianhorseracinghalloffame.com