Rocknroll Hanover left both the track and this world with the sport wanting more.

The Canadian-owned son of Western Ideal, out of Hall of Fame, Canadian-raced mare Rich N Elegant, left the track after a dominant 1:49.4 win in late November of 2005 in the final of the Breeders Crown for three-year-old pacing colts at the Meadowlands.

He died in the prime of a successful stallion career when he was euthanized at the age of 11 in March of 2013 after developing a gastric impaction. Rocknroll Hanover sired the winners of some $65 million from seven racing-aged crops and was one of the top pacing stallions of his generation.

On the track, Rocknroll Hanover earned over $3 million for Audrey Campbell’s Lothlorien Equestrian Centre of Mississauga, ON, Jeffrey Snyder of New York City and Perretti Racing Stable of Cream Ridge, NJ, the farm where the pacer stood for his entire post-racing career.

Rocknroll Hanover won all three of pacing’s million-dollar races He became the sport’s first sub-1:50 two-year-old when he won the $1 million Metro Pace in 2004 at Woodbine in 1:49.4. At three, he won stakes races from May all the way to December, including the $1.5 million Pepsi North America Cup at Woodbine in June and the $1 million Meadowlands Pace in July. He is the only horse in history to win the Metro, North America Cup, Meadowlands Pace and a Breeders Crown.

Rocknroll Hanover was never worse than third during his entire sophomore campaign. He posted a 12-4-2 record in 18 starts and earnings of $2,380,818, about $200,000 off harness racing’s single-season earnings record at the time. The colt was named the U.S. Horse of the Year for 2005 and earned an O’Brien Award as the top sophomore pacing colt in Canada. He averaged over $100,000 in earnings per start over 26 career races in which he sported a record of 15-5-5 for trainer Brett Pelling and driver Brian Sears.

“The key to him is he does relax,” Pelling said after Rocknroll Hanover won the Breeders Crown. “He handles change well. He’s got class. Class is an undeniable thing. It’s kind of like all these horses you see wearing hoods and ear plugs and different things, he doesn’t wear anything.”

Rocknroll Hanover retired from racing as the richest of Rich N Elegant’s nine racing-aged foals, which is saying a lot when the same mare produced Rustler Hanover ($971,638), Royalflush Hanover (over $2.1 million), Richess Hanover (over $500,000) and Red River Hanover (nearly $1.4 million). 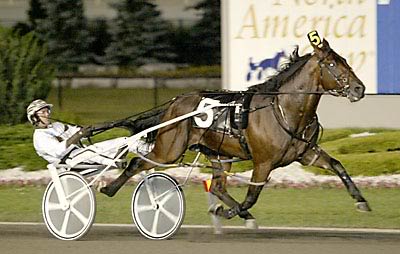