During the 1990s, Apelia was unquestionably Canada’s dominant female sprinter, a recognition she richly earned on Canadian soil as well as with her gutsy performances against the leading distaff sprinters in the world. The dark bay filly won graded stakes or earned stakes-placed finishes in New York at Belmont and Saratoga, in Kentucky at Keeneland and Turfway and in New Jersey at Garden State and The Meadowlands.

Bred and owned by Steve Stavro’s Knob Hill Stables, Apelia ran only in stakes races below the border and 11 of her career 24 starts came in added-money races in the U.S. Two of her upsets came against the elite in her category – Breeders’ Cup class sprinters Meafara and Spinning Round.

Apelia was unraced at age two in 1992. But the following year, the homebred daughter of Cool Victor and Arbela was voted Canada’s champion sprinter against both males and females She won her maiden race at Greenwood by seven lengths, but after losses in the Fury and Star Shoot Stakes, she reeled off three allowances victories before a non-threatening seventh-place finish in the Ontario Damsel. Seven weeks later, she made her debut in the U.S. at Saratoga and won the Gallant Bloom Stakes over Preach, winner of the Grade 1 Frizette Stakes and later the dam of top sire Pulpit. It was her debut at Saratoga that convinced voters that Apelia was something special. She came back to Canada to win the Ontario Fashion, but lost to Myrtle Irene in the Jammed Lovely.

In her four-year-old championship season, she performed only in stakes races, winning five in nine starts and finished out of the money only once, when she got bumped badly coming out of the gate at Santa Anita in the Breeders’ Cup Sprint, finishing 14th. Apelia opened her U.S. campaign at Kentucky’s Turfway, winning the Queen’s B.C. Stakes. A half-length loss in Grade 3 Thoroughbred Club of America Stakes at Keeneland was followed with impressive victories in the Garden State Budweiser B.C. Handicap over the brilliant Meafara and then the Grade 2 Genuine Risk at Belmont.

The Phil England-conditioned filly had a busy summer, finishing third in the Grade 1 Ballerina before returning to Woodbine to win the Royal North B.C. Handicap and the Toronto Budweiser B.C. Handicap against the males, one of which was multiple stakes winning stablemate Megas Vukefalos, who was also by Apelia’s sire, Cool Victor. Her busy season ended with losses in the Ontario Fashion and the B.C. Sprint at Santa Anita.

At age five, she exhibited the speed that had earned her a Sovereign Award as Canada’s top sprinter. Her first start was at Garden State in the Budweiser B.C. Hdcp. and was second. Then back to Belmont for another win in the Grade 2 Genuine Risk, upsetting one of the top fillies in America, Spinning Round. The fact that the victory came in the Grade 1 race at Belmont was not lost on her trainer Phil England. Normally a man of few words, he stated: “We like Belmont, period. We just like coming here every chance we get, and they’ve got good horses here. She jumped out on the lead, which surprised me a little. She doesn’t have the speed that Meafara has, she has to work hard for everything.” Apelia was clocked in 1:09 in her three-length win over Spinning Round.

Apelia finished the season and her career with losses in stakes races at Saratoga, the Meadowlands and Woodbine, where her career began. In 24 starts, she had a 12-3-3 record and earnings of $621,708.

Stavro acquired Arbela, the dam of Apelia, for $36,100 from the consignment of E.P. Taylor’s Windfields Farm at the 1986 Woodbine Sales Company’s September yearling sale. She was Arbela’s first foal. Arbela was a daughter of stakes winner Street Ballet, sired by Nijinsky II.

As a broodmare, Apelia is the dam of multiple stakes winner Saoirse. Sired by Cure The Blues, Saoirse won a Sovereign Award as champion older mare in 2000. 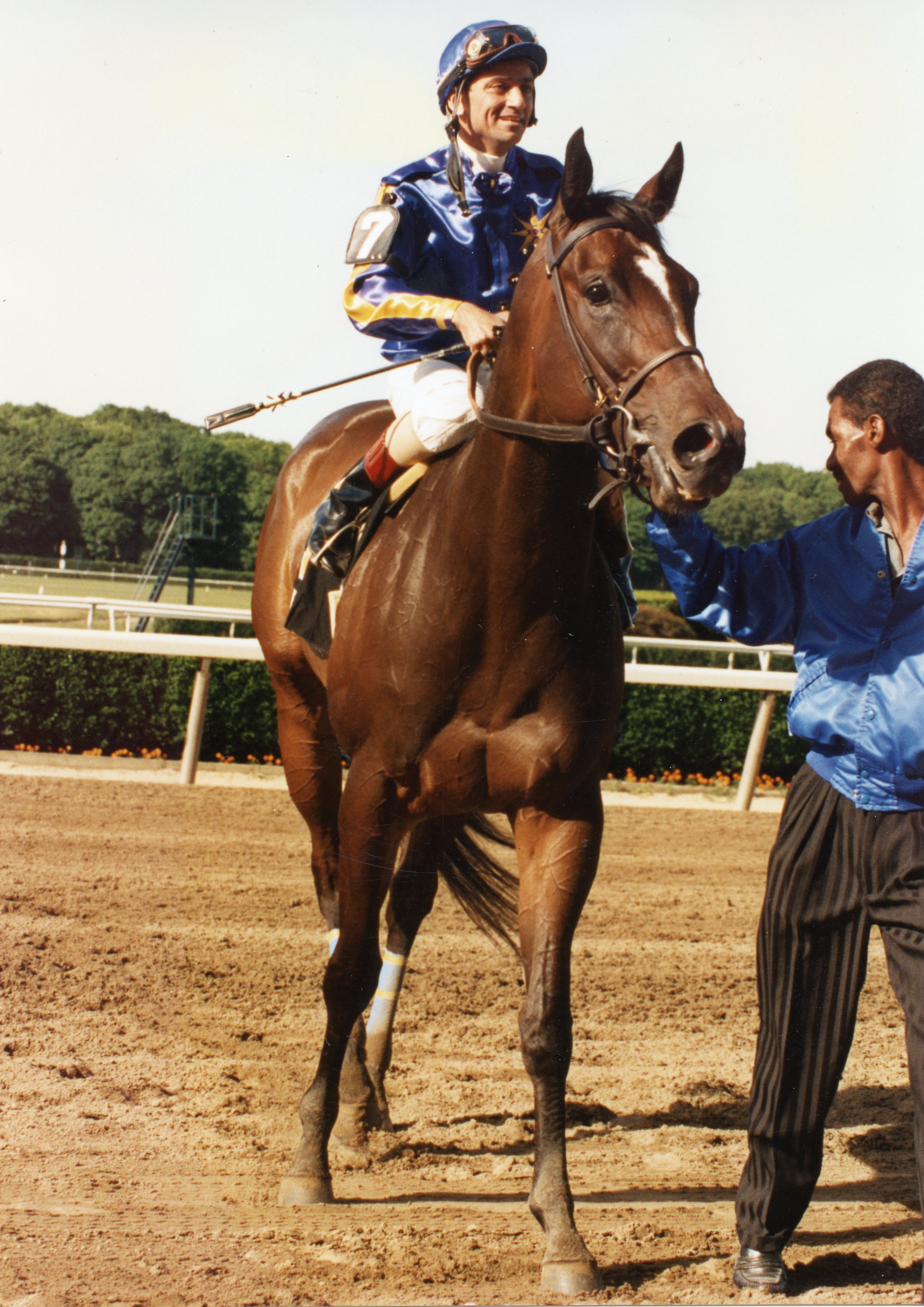