October 28, 1973, an incredible thoroughbred nicknamed “Big Red” ran the last race of his awesome career in near darkness on a cold rainy afternoon at Woodbine. Secretariat, the horse who had captivated the imagination of the racing public in America for nearly two years, offered his “last hurrah” over the slick Marshall Turf Course before a shivering, adoring audience of 35,117, some of which dashed across the dirt track to catch a better glimpse of this marvelous equine machine as he cruised down the stretch. America’s  other “Big Red”, Man o’ War, also ended his career in Canada, winning the Kenilworth Gold Cup in a match race against Triple Crown winner Sir Barton at Windsor in 1920. Horse experts, some of which had seen the two “Big Reds” in action, were divided in their opinions of who was worthy of the crown as “Horse of the Century.”

Canada and Woodbine were the beneficiaries of this 1970s spectacle, witnessing and saluting Mrs. Penny Tweedy’s awesome colt of Meadow Stable.  Secretariat had rewritten racing history in 1973 with his stunning Triple Crown sweep of the Kentucky Derby, Preakness and Belmont Stakes, setting track records in all three races and two world records. TV ratings soared whenever the red horse with blue and white blinkers and silks was on the screen.  Rarely, and especially on this Sunday afternoon, had there been a time when more fans pulled for one competitor to win, even those who bet against him. Many of the $2 mutuel tickets bearing two words, Big Red, went uncashed.  Fans kept them for souvenirs. For Secretariat’s finale the racing community responded with adulation seldom before exhibited at a Canadian track. They came from  Texas, Ohio, California, Michigan, Kentucky and Massachusetts, and every province in the country to see the horse many acclaimed as “The Horse of the Century”.

Penny Tweedy, the daughter of The Meadow’s owner and breeder Christopher T. Chenery, had taken over her dying father’s financially ailing stable, and acquired the rights to a Bold Ruler foal that Somethingroyal was carrying on a coin flip with Ogden Phipps of famed Wheatley Stable in 1969. Big Red’s appearance in Toronto drew massive attention of American media, giving the race the glamour, prestige and respectability it sought from the racing world. The awesome chestnut colt had become a household word in North America. In 1972 he became the first juvenile to be named Horse of the Year and repeated, of course, in his illustrious campaign of 1973 when he became the first Triple Crown winner since Citation in 1948.

But why Canada and an unfamiliar site for Secretariat’s “last hurrah”?  It was largely the result of a friendship and mutual respect between two men –  E.P. Taylor of Windfields Farm and Chenery. His daughter had often confided in Taylor and she returned a favor by declaring that her colt would end his career on Woodbine’s turf course.  Before his 1973 season, Secretariat became the solution to a financial crisis. Chenery died in January and as the builder of Meadow Stable in Doswell, Va., he left behind hefty estate taxes. His family decided to pay the bill by selling Secretariat to a breeding syndicate that would assume ownership at the end of the horse’s racing days. The price tag was a then world record $6.08 million—40 shares at $152,500 apiece. Taylor was among the first to buy a share in the syndicate.  Under the terms of the syndication, Secretariat  would not race after his 3-year-old season, and 18 days after his Toronto race he had to be at Bull Hancock’s Claiborne Farm, home of Secretariat’s sire, Bold Ruler, to begin his stud career. Breeding rights were sold before he won the Triple Crown, a gamble for nervous investors.

The week before the race, Quebec-born trainer Lucien Laurin visited Woodbine to inspect the hillside course. He told management that the grass seemed dangerously long, and recommended that it should be cut and rolled. The grass was extra long because of a prolonged wet spell. The 1 ½ mile course crossed a dirt path after it exited the downhill slope from the outer course before circling the inner 7-furlong course.  Further concern for Mrs. Tweedy and Laurin was that Secretariat’s veteran Canadian jockey Ron Turcotte, who had ridden him in 18 of his 20 races, was suspended for five days for a careless riding infraction that week at Aqueduct.  He was replaced by Eddie Maple. Turcotte went to Woodbine to work Secretariat over the Marshall course, a workout that amazed officials when more than 3,000 fans showed up on a foggy morning to witness the colt’s lightning fast five-furlong work of 57 3/5ths seconds. Clockers were stunned.  The work was a full second faster than the track record.

On Sunday afternoon spectators jammed the walking ring to witness the saddling, roaring when Maple was hoisted up on the colt. He was told that the only horse to pay attention to in the 12-horse field was Kennedy Road, who would be named Canada’s 1973 Horse of the Year. He was the speed and Maple was instructed to bide his time before challenging him. In the backstretch Kennedy Road, ridden by Avelino Gomez, veered out and bumped Secretariat. Maple gathered his horse, steadied him and within a few strides was pulling away from his challenger. The lead lengthened to 12 lengths for the 1-to-5 favorite.  Meadow Stable’s familiar blue and white silks finished  6 ½ lengths ahead of Big Spruce. Asked what excited her about Secretariat’s final race, Mrs. Tweedy said, “The fact he won. It was a very tense race.” She explained that the tenseness was prompted by the fact that Secretariat was running on a type of turf he’d never run on before, because it was wet and because her horse was ridden by a jockey who had never been on his back until 4:40 p.m. that afternoon.
Secretariat’s legendary status grew as he became a national celebrity. He was pictured on the cover of three U.S. national magazines – Time, Newsweek and Sports Illlustrated, which sent a helicopter to Woodbine to pick up photos of the race. Because of the dark, gloomy conditions it was unable to use them for its cover. Hollywood’s Disney studio made a movie of his career. 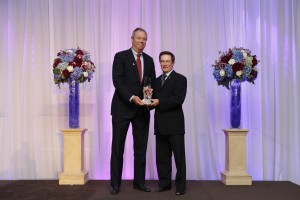 The incomparable Secretariat was recognized for his contribution to Canadian Racing 40 years after he wowed the crowds at Woodbine with a decisive win in the Canadian International, the final race of his career. Hall of Fame Jockey Sandy Hawley had the honour of making the presentation to Chris Tweedy, son of Penny Chenery.

At stud Secretariat failed to create his greatness in his offspring, especially in his males. His best colts were Preakness and Belmont winner Risen Star, Melbourne Cup winner Kingston Rule, Tinners Way and General Assembly, winner of the 1979 Travers Stakes at Saratoga. His most noted runner was Lady’s Secret, 1986 horse of the year. Secretariat was  a noted broodmare sire, and was the maternal grandsire of 1992 horse of the year A.P. Indy. Secretariat was also the “damsire” of Storm Cat. In the fall of 1989 Secretariat was afflicted with laminitis – a painful and often incurable hoof condition. When his  condition failed to improve after a month of treatment he was euthanized on October 4 at the age of 19. He was buried at Claiborne Farm in Paris, Ky.