Legendary does not begin to describe Niatross, a horse many consider to be the greatest standardbred in history. 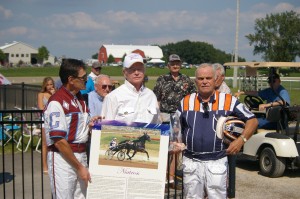 Trained and driven by Ontario native Clint Galbraith (who was inducted into the Canadian Horse Racing Hall of Fame in 1998), Niatross won 37 of 39 career starts, set 15 world records and earned more than $2 million on the track. Included in his accomplishments were both a race and track record of 1:53.4 in the 1980 Prix d’Été at Montreal’s Blue Bonnets, the fastest Canadian mile at that time.

After retiring to stud at Castleton Farms in Kentucky, Niatross sired winners of over $62 million, including three millionaires.  His most famous son, Nihilator, earned more than $3 million on the racetrack.

Niatross, a son of Albatross out of Niagara Dream bred by Elsie Berger’s Niagara Acres of Grand Island, NY, was born on March 30, 1977 at Hanover Shoe Farms.

In September 1979, after Niatross won his first six races, Berger sold a half interest in the pacer to stockbroker Lou Guida and the Niatross syndicate for $2.5 million in cash. The pacer was undefeated in all 13 starts at two and earned the 1979 U.S. horse of the year award, a remarkable accomplishment for a freshman.

The next year, in an elimination for the Meadowlands Pace — the first $1 million event for either standardbreds or thoroughbreds — Niatross broke stride, lost valuable ground, regained his gait and, in what many say was his greatest performance, recovered to finish fourth and qualifying for the final. In that final, Niatross went right to the front and never looked back, winning easily.

In his other loss at the Saratoga Standardbred track in Saratoga, NY, he spooked and fell over the inside hubrail. He recovered from some superficial scrapes and went on to beat all of his competition easily in future starts.

Niatross retired as the richest standardbred in history and was named both the 1980 U.S. horse of the year and the New York Post’s athlete of the year over human competition.

In May of 1999, Niatross took ill and was transported to the University of Pennsylvania’s New Bolton Center where he was diagnosed with a large cancerous mass in his abdomen. On June 7, 1999, Niatross was humanely euthanized.

He is buried at the entrance to the U.S. Hall of Fame in Goshen, NY and remembered fondly as one of the best to ever look through a bridle.