It is debatable that any publicist ever enjoyed the tenure in office that Bruce Walker did during a laudatory career that began in 1960 and concluded following his retirement in 1997. He pioneered events and promotions that enhanced the sport of horse racing, some of which are still growing in stature. “I was working at United Press International when Jim Coleman (the Ontario Jockey Club publicity director) hired me in 1960.”  In 1967 Walker took over the department, promoting racing at Woodbine, Fort Erie and Greenwood.

It was the golden age of horse racing in Canada and for thirty seven years Walker had the privilege of presiding over many memorable events – the impact of Northern Dancer’s Kentucky Derby victory and chase for the Triple Crown as well as his quest for the throne as the world’s leading stallion; the spectacular finale of Secretariat’s career on the turf course at Woodbine and the organization and tasks that he undertook in the awarding of the Breeders’ Cup for the first time in 1996 to Canada.  You could add numerous other events – Sandy Hawley’s remarkable career and quest for a world record 515 victories and race track promotions which earned Walker the plaudits of his peers and several awards.

“The Dancer was definitely a story that attracted huge national attention and pride by Canadians in ‘64. But 1973 was a big year as well with the world media, “Big Red” ending his career on Canadian soil; Sandy’s remarkable season in breaking the 500 barrier and with Her Majesty, Queen Elizabeth, visiting Woodbine.”  Writing the literature for the brochures and scripts and co-producing the video presentation to convince Breeders’ Cup officials to bring the races to Canada as well as planning the media party at the SkyDome  were also part of the many duties he tackled. His co-ordination of the media at Breeders’ Cup ’96 was hailed as the one of the most successful ever. 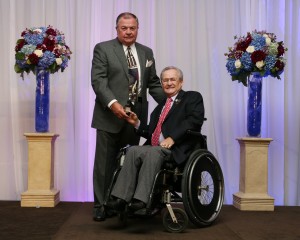 During his years in the employ of the OJC he built a reputation as the best publicity director in Canada and one of the most respected P.R. men in North American racing. In 1997 he was presented with the Turf Publicists of America Award of Merit. It was the first time that the PTA and the National Turf Writers Association had recognized the accomplishments of a turf publicist. Walker is the only Canadian to serve as president of the TPA.  He was also singled out by Frank Drea, chair of the Ontario Racing Commission, for his outstanding service to thoroughbred racing. In 1973 Walker was among the founding members of the Canadian Horse Racing Hall of Fame and also served as chairman of the nomination and election committees. Walker was also involved in the publicity campaign for the ABC system (betting and cashing) pioneered at Woodbine. The TRA presented its inaugural special award in 1980 to Walker for producing the best media fact book in North America. He has won four Sovereign Awards for best feature story on Canadian racing. Walker now lives in Cambridge, ON.

His favorite promotion was a barbecue in the walking ring at Woodbine when the starters in the Queen’s Plate were paraded for the media. Some of his other promotions included the 100th anniversary of Greenwood racetrack in 1976, integrating thoroughbred and standardbred racing that night; Steve Cauthen Day at Woodbine and the All-Star Jockey competition at Woodbine and Fort Erie. He was a founding member of the Avelino Gomez Memorial Award. His other credits include the film“Flying Colors” and chairman of the Sovereign Awards entertainment program.