Paynter, son of 2001 CHRHF Inductee Awesome Again, has been named the 2012 Secretariat “Vox Populi” Award winner. 2012 Belmont Stakes Runner-up Paynter, overcame huge odds to come back from life-threatening colitis, laminitis in three hooves and colon surgery to remove abscesses that were causing serious infection and fevers.
It’s fitting also because the legendary Secretariat suffered from laminitis, a painful and often incurable hoof condition. It was the great Barbaro who’s laminitis treatment undoubtedly led to medical advances in treating this disease, that surely contributed to Paynter’s recovery.  Paynter is expected to resume training shortly with the hope that he will be able to return to racing in 2013.  The Secretariat “Vox Populi” Award annually recognizes a horse whose popularity and racing excellence best resounded with the general public and gained recognition for the sport during the past year.   The announcement of the honour was made December 26, 2012 by Penny Chenery from a field of entries which included Frankel, I’ll Have Another, Royal Delta, Shackleford, Shanghai Bobby, and Wise Dan. Presentation of the award will take place December 29th at Santa Anita 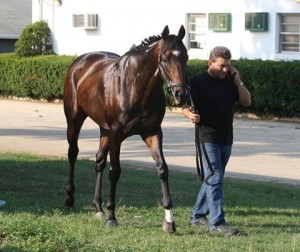