In early 2002, R. Peter Heffering made one of his legendary gambles on an Illinois-bred trotting colt named after a Pokemon character. “I did tell him I thought he was nuts,” Heffering’s son, David, recalled. “And when a friend of mine, Danny Phillips, heard about the deal he called me and said,‘Has your dad lost his marbles?’”

Ten years later, Kadabra is being honoured for his prowess on the track and in the breeding shed.

His induction comes five months after Peter Heffering died at age 80 and just two years after Heffering was inducted into the Canadian Horse Racing Hall of Fame as a builder.

The group was convinced of the merits of the deal based on Kadabra’s freshman record — 12 wins and two seconds in 14 starts with a record of 1:56.2 — and his outstanding conformation. Although his sire Primrose Lane(Meadow Road – Barbs Pride) and dam Quillo (Trottin Happy – Arsenals Dynasty) were not household names, they were from solid families and Quillo had already produced two Illinois stakes winners, Money Minded and Lifes A Holiday.

Although Connie and Homer Hochstetler were reluctant to part with their gifted homebred, Connie’s father, Doug Ackerman, offered some advice that helped them make the decision to accept Heffering’s $800,000 offer — then the highest price ever paid for an Illinois-bred. 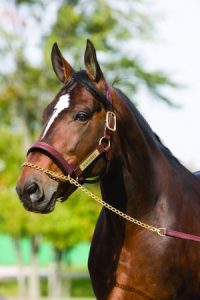 “We talked to my dad when we got the offer and he said, ‘You’ve got the factory, sell the product,’” recalls Connie Hochstetler. “But my son (Jay) was not very happy when we sold him.” Named after a favourite Pokemon character of then nine-year-old Jay’s, Kadabra kicked off his sophomore career in June 2002 and quickly turned any remaining doubters into ardent fans as he reeled off wins in the elimination and final of the Stanley Dancer at the Meadowlands. Forced to sit on the sidelines while Chip Chip Hooray took home the Hambletonian trophy — the Hochstetlers had not kept their trotter eligible —Kadabra returned to action with wins in the Review Stake and the American-National, missed out on the World Trotting Derby title, but then swept the class in his last six starts, capturing eliminations and finals of the Canadian Trotting Classic, Breeders Crown and Matron Stake.

Kadabra added four more wins at four and a speed tab of 1:51.3 to his resume before a suspensory ligament injury in his right hind leg brought his racing career to a halt in August 2003. Subsequently, the decision was made to stand the horse at the Hefferings’ Tara Hills Stud.

On January 14, 2021 Tara Hills Stud announced Kadabra had been pensioned from stallion duty at age 22.

It had earlier been reported the prolific sire had sustained a hock injury and his breeding plans for 2021 were on hold.  “It is with great sadness that we announce Kadabra’s retirement from stud duty,” said David Heffering of Tara Hills Stud in a statement on Thursday (Jan. 14). “Kadabra leaves a great legacy and influence on the Standardbred breed, not only in Ontario, but industry wide. Over the course of a 17-year stallion career, Kadabra has cemented his place as one of the all-time great trotting stallions with progeny earnings of over $101 million. Champion fillies and colts included Bee A Magician, Emoticon Hanover, Daylon Magician, Flanagan Memory, Caprice Hill, Forbidden Trade, Poof Shes Gone, Will Take Charge, and many more.
“It has been a great honour for us to have cared for and managed Kadabra throughout his stallion career. Thank you for your support over the years.”
Kadabra sired over 1,300 horses, with 926 having made the races, 147 taking marks of 1:55 or faster, and eight earning at least $1 million in their respective racing careers.
(updated January 14, 2021)