By the mid 1960s there wasn’t a more respected horseman in the country than Patrick MacMurchy, a Scotsman whose reticent demeanor spoke volumes.

For years he had trained for some of the most influential owners in the business,
Col. Sam McLaughlin and his Parkwood Stable, K.R. (Rud) Marshall, president of the
Ontario Jockey Club, R.W.R. Cowie and Mrs. J.A. McDougald. His career saw him
train numerous stakes winners, including Hartney, horse of the year in 1957, and Blue Light, the long-shot Queen’s Plate winner of 1961.

There was talk that MacMurchy was considering retirement. But a big, black colt postponed that idea when he and Peter Marshall, son of the late OJC president, took a liking to a regally bred son by Canadian Champ at E.P. Taylor’s pre-priced yearlings sale that carried a tag of $15,000. He would be named Titled Hero. A year later he was Canada’s champion juvenile and the odds-on favourite for the upcoming Queen’s Plate after winning the Coronation Futurity, Summer and Grey Stakes, and eight races in 12 starts and more than $100,000.

It would be MacMurchy’s skills that enabled Titled Hero to get to the starting gate for the mile and a quarter test of the Plate, which he won under a great ride by Avelino Gomez.
Hobbled continually by hoof problems that year, Titled Hero also won the Breeders’ as well as the Plate Trial, Friar Rock Stakes and earned champion 3-year-old honors.

Until his two Plate winners came along in the 1960s, MacMurchy’s best horse was the 6-year-old gelding Hartney, owned by “Rud” Marshall. He capped off the 1957 season by winning six races in a row, usually at top weight, to earn the Daily Racing Form’s Horse of the Year honors. Pat won 27 races that season. 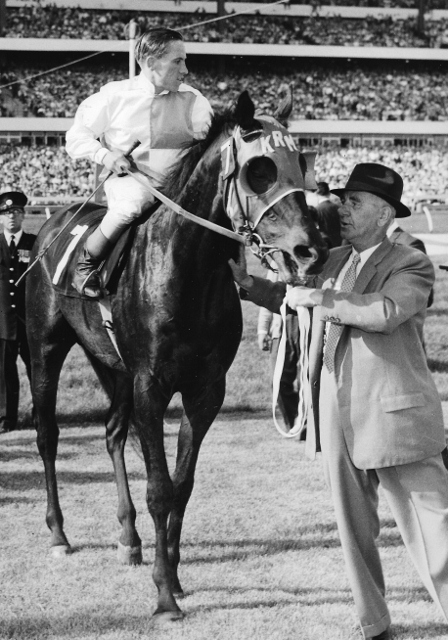