Bay Mare – Foaled 1956 by Ezra Blue, dam Sheila Lee by Lee Harvester
In an era when a two-minute mile was a standard of excellence for standardbreds, Dalyce Blue became the first Canadian-bred trotter to record a sub-2:10 mile as a 2-year-old and a 2:05 mile at three. Bred by Madawaska Farms Ltd., of Arnprior, Ontario, Dalyce Blue was trained and driven by veterinarian-horseman Dr. John S. Findley who co-owned the farm with his father, John H. Findley.

Dalyce Blue had to race against older horses and even pacers early in her career because, in the 1950s, trainers were still reluctant to race two and three year olds. In her first start at 2 in 1958, she beat a field of pacers in two heats at Arnprior Fair and went on to win 8 of 10 starts and was second in her only loss. Racing against contemporaries, including colts, she won the Canadian Futurity at Old Woodbine and ended the season with a 2:09.4f win at Richelieu Park, Montreal, against older horses. This was the first time a Canadian-bred 2-year-old trotted in 2:10 or faster. 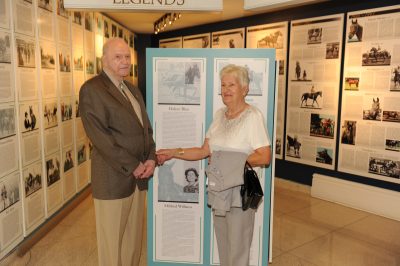 Dr. John Findley and wife Mary Jane at the unveiling of Dalyce Blue’s display panel in the Canadian Horse Racing Hall of Fame

Her 3-year-old season, in 1959, was even more impressive. She won 13 of 16 starts and was second in two others. No 3-year-old trotter, colt or filly, American or Canadian-bred, beat her that season. She won six stakes events, including the Canadian Standardbred Futurity at Blue Bonnets in Montreal and the Ottawa Valley Futurity, against pacers, at Perth, Ontario. She also won a Blue Bonnets Invitational. But the defining moment of her career occurred at Suffolk Downs near Boston where she faced most of the best 3-year-old trotters in the US., including World Champion Sara Black, in the $28,400 Suffolk Downs Trot. At odds of 14-1, Dalyce Blue “came out of the pack in a corking five-way duel in the last sixteenth” to win going away in 2:04.3f. Thus, she became the first Canadian-bred trotter to beat 2:05 at three.