Prior to the year 1900, the leading jockey in North America was a young Canadian from the small hamlet of Cedar Springs, which was just down the road from Chatham, Ontario. Thomas H. Burns led all jockeys in most wins in both 1898 and 1899. His amazing feat in 1898 of winning 28 percent of his races — 277 wins from 973 starts – would not be surpassed until 1953 when Bill Shoemaker won with 29 percent of his mounts.

During his career Burns rode for some of the great stables in the United States and was aboard horses later inducted into the U.S. Hall of Fame in Saratoga, N.Y., an establishment he would also be inducted into in 1983, becoming the first Canadian rider honored at Saratoga. His classic mounts included the immortal Broomstick, Imp, Lady Navarre and F.W. Bode, who won a three-horse match race in San Francisco in 1899 in 1:39 ½, the fastest time at a mile for a 3-year-old.

Burns’ stakes victories included the Travers, Tennessee Derby, St. Louis Derby, Tennessee Oaks, Manhattan, Metropolitan, Brighton, Wheeler, Brooklyn, Long Island, Ladies, Twin City and Saratoga Handicaps, the Gravesend Second Special and Carlton Stakes. The Kentucky Derby eluded the Canadian. Three times he finished second; by a nose in 1898 to Plaudit and his hated rival Willie Sims. Burns had two rides in the King’s Plate, finishing second on Will King to the great Inferno in 1905. He was ninth in 1908. His brother, Guy, won the Plate in 1914 on Beehive. 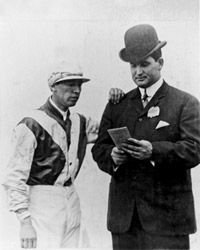 Born in 1879, Burns began working in his early teens for his uncle, who raised and trained horses. At age 16 he rode at the Windsor track and recorded his first win at Hamilton for future Hall of Fame trainer Charles Boyle on the filly Gwendoline. Shortly afterwards Burns was apprenticing at Sheepshead Bay in Brooklyn with the legendary William C. (Father Bill) Daly, a tough disciplinarian whose graduates numbered more than thirty leading riders, including Hall of Famers Snapper Garrison, Danny Maher, Winnie O’Connor and Jimmy McLaughlin, who later became Burns father-in-law. By 1896, at age 17, Burns was a regular on the western circuit, which extended from St. Louis, California and New Orleans, through Kentucky and up to Windsor and Fort Erie.

With repressive legislation threatening racing at eastern U.S. tracks during the first decade of the 20th century, Burns joined numerous other jockeys and horsemen who journeyed overseas to ply their trades. Burns was highly successful in both France and Germany, winning on the flat, over the jumps and in steeplechase races. Burns’ riding style was often described as being “daredevil and reckless”. At times he resorted to questionable tactics and was deft with the whip. A New Orleans’ writer said, “Few are as strong as Burns in finishing.” 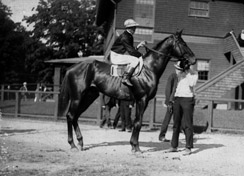 Burns rode in Europe in 1912 -1913 and two days after returning from Germany he was killed on November 14, 1913, at the age of 34. He was on his way from New York to his home in Brighton Beach when he apparently fell in front of a train in Brooklyn. Burns rode 1,333 winners and had a lifetime winning percentage of 20.7. 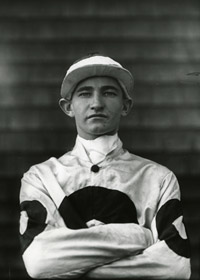