Foaled in 1902 in Deerfield, MI, The Eel, also affectionately known as “The Grey Ghost”, was acquired in 1903 by Frank W. Entricken of Tavistock, ON. In 1906, he was handed over to Dan McEwen of London, ON to begin training as a pacer.

While he was first tested in 1907 in Syracuse, it was 1908 when The Eel began to establish himself as one of the most successful pacing stallions of his time. In that year, he was the year’s highest money winning pacer, earning $12,450, setting two world records (three consecutive heats by a pacing stallion and three consecutive heats over a half-mile track by a stallion). He also set the American Grand Circuit season record for the fastest half-mile mark of the season, 59.0, doing it twice.

In January of 1909, he smashed the world record on ice by more than three full seconds when he paced in 2:14 ½ in Toronto. Later that month he beat his own record while on the ice in Ottawa, pacing the mile in 2:11 ½. He also set the Canadian half mile track record in 1909, pacing a mile of 2:05 ½ in Stratford, ON.

While The Eel was ill for most of his 1910 campaign, and only raced three times, he rebounded for a solid season in 1911. In 1912 he returned to his record-breaking form, setting the Canadian record for a half-mile pace, recording a time of 1:01 ½ in Mitchell, ON

Upon his death, the Horse Review wrote, “he paced 152 contested heats, 94 of which he won, while in 37 he was second, in 14 was third” and “in those 152 heats, paced over dirt and ice, over mile and over half-mile tracks, he was never once distanced, drawn, or ruled out.”

Legendary writer John Hervey, in a 1941 retrospective, called The Eel “in many ways one of the most wonderful that the Standard breed has produced.”

“In action he was a fascinating thing to watch and this added to his popularity – he was far and away the most popular pacer of his time with race-goers. When to this we add his lion’s heart, his endless gameness, stamina and consistency, we have indeed a horse such as seldom comes into the world.” 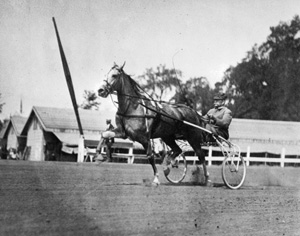