Although she had speed to spare, Burning Point was never the volatile, combustible flash foretold by her name. Rather, she was a heat-seeking, slow-burning flame, a steady accelerant that never, ever ran out of fuel.

The consistency and the quiet confidence of an all-pro, iron mare are the things that owner Shelby Novick of Delray Beach, FL found himself reflecting upon as her induction into the Canadian Horse Racing Hall of Fame approached. “To me, she was the Lou Gehrig of horse racing,” said Novick, who is still amazed, years later, by Burning Point’s ability to stay healthy and answer the bell over and over and over again. “She never had a hangnail. She never had a cold. She never missed a race — never scratched, never missed a stakes appointment,” he said, remembering fondly how he used to naively run up to her trainer immediately after every race and ask, ‘How’d she come out of it?’

Ken Solomon, who shared ownership with Novick as the Cuzzins Stable during Burning Point’s racing career, agrees that her toughness was beyond reproach. “She was dog tough, an iron mare. Didn’t miss a dance. All the big races, she was there. She showed up. We never scratched lame or sick.” However, to dismiss her as a grinder would be foolish. Burning Point made her bones against some of the strongest competition in the history of her age and gait, collected two Dan Patch awards, an O’Brien Award, two Breeders Crown titles and countless other top stakes en route to becoming the richest Canadian-bred pacing mare in history with more than $3.1 million in earnings during her career. 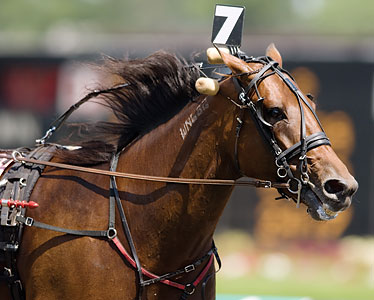 She is the richest offspring of superstar sire and fellow Hall of Famer Camluck, who also sired 2011 inductee Invitro — the second-richest credit to the stallion’s name. Bred by trainer Fred Drouillard of Dutton, ON, Burning Point (Camluck—Tour De France) graced Ontario B-tracks in her two-year-old season, showing off enough promise for Novick and Solomon to purchase her just before the start of her three-year-old campaign.

Trained by Linda Wallis and driven by her husband Kevin for that season, Burning Point parlayed her success as a sophomore in the Ontario Sires Stakes (OSS) program — two Gold Final victories and a runner-up finish in the Super Final — into a chance to compete for all the marbles in the biggest year-end stakes.
The highlight of highlights was supplementing into and winning the 2003 Breeders Crown at age three — holding off Armbro Amoretto for the title and completing the jump from OSS to Grand Circuit competition. Once there, she never left the stakes trail, moving into the barn of trainer Steve Elliott and facing the world’s best mares week in and week out, year after year until her retirement at the end of the 2007 season.

In 140 career starts, she finished on the board 100 times. She collected a cheque in 43 straight starts twice during her career (2003-2004 and 2005-2006).
Moreover, this was all achieved while racing amongst some of the greatest pacing mares the sport has ever seen. Burning Point often faced entire fields of nothing but millionaires, against contemporaries such as Eternal Camnation, Bunny Lake, Darlins Delight, Loyal Opposition, Invitro, Glowing Report, Worldly Beauty, Armbro Amoretto and Carolina Sunshine, among others.

In short, there were no free quarters, halves or miles, and on the aforementioned list of great mares, only Eternal Camnation’s $4.1 million in earnings tops Burning Point’s career bankroll.

When Burning Point finally retired herself, she left the racetrack with a mark of 1:49.2 taken at the Meadowlands and 46 lifetime wins.

To date, Burning Point, who is now owned solely by Novick, has given birth to two fillies — both with Hall of Fame pedigrees.

Her first foal Sangaal, now a two-year-old in training with Chris Ryder and owned by Solomon, is by fellow Hall of Famer Real Desire, while Novick owns her yearling Somebeachsomewhere (Hall of Fame, class of 2009) filly, Burning Beaches, who has been entered into the Harrisburg sale in the fall.

Solomon sees a lot of Burning Point in his young filly. “Oh, she’s Grand Circuit. She’s real handy with her mother’s personality. She’s real tough on the front end, won’t let a horse get by her — just like her mother.”­­