Gord Irwin remembers well the moment his homebred pacing filly Invitro made his dreams come true. It wasn’t the life-altering $2.38 million that she made, or her utter dominance in the Ontario Sires Stakes (OSS) program, or her big stakes wins. It wasn’t how she has become a poster child for stigmatized embryo transfer foals everywhere or how she stands as a symbol for all that can be accomplished by racing almost exclusively in Ontario. It wasn’t even when he got the call that his filly could count herself among the sport’s all-time greats by way of her forthcoming induction into the Canadian Horse Racing Hall of Fame.

No, for Irwin, all of the above are the pieces that fell into place long after that one perfect moment that started it all. On July 19, 2003, at Kawartha Downs, in her very first race, Invitro fell behind 10-and-a-half lengths by the quarter pole against OSS Grassroots competition. Amazingly, she rallied to win by two lengths at the wire in 1:56.3. “It was a feeling that I still can’t describe. There were literally tears in my eyes and I couldn’t hold my emotions,” said Irwin. “She was dead last and you wouldn’t pay 15 cents for her and she laps everything and wins her first race. Then, I knew I had something and from then on it just progressively got better and better and better. But, thinking back, that was the defining moment.”

From that day onward, until her final career start more than five years later, Invitro took off and soared to heights once thought laughable to Irwin and his long-time friend and business partner Murray Ross, two self-described small-timers who toiled for decades with a handful of broodmares and B-track offspring before striking gold with the daughter of Camluck—Keystone Trinidad. Born in April 2001, Invitro came into this world at Ross’ dairy farm in Norwood, ON via a surrogate dam. Reluctant to take Keystone Trinidad, herself a lifetime winner of $187,787, off the track in favour of the breeding shed, Irwin and Ross, who share breeding credit, opted for an embryo transfer engineered by former Armstrong Bros.’ president Dr. Moira Gunn.

In all, Invitro has been an exception to the rule many times over. Her success on the track in the hands of driver Paul MacDonell — including her lifetime record of 35-30-11 from 106 starts, a speed mark of 1:50 and close to $2.4 million in purses — shattered many long-held industry stereotypes that embryo transfer (ET) foals were somehow inferior to their non-ET counterparts.

Fittingly, Invitro will join her father, Camluck, in the Hall of Fame, serving as another of Ontario’s great racing and breeding success stories. Of the $2.38 million to her name, Invitro earned only $6,800 outside Ontario’s borders through her one lone start at the Meadowlands in May, 2007 in a leg of the Classic Series. Had that trip not been necessary in order to qualify for the series final back at Mohawk, her feet would have never touched foreign soil. For Irwin, who lives in Cobourg, ON, it was simple. Ontario was always good enough, providing more opportunities than he ever thought possible. 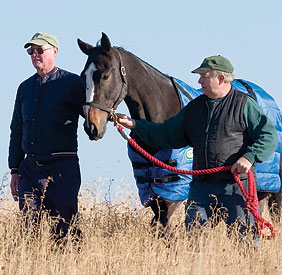 She climbed the ladder from her beginnings in the OSS Grassroots to the top of the Gold standings, eventually capturing the $300,000 Super Final in Nov. 2004, just three weeks after finishing a close, tough second (as a $62,500 supplement, no less) to world-beating superstar Rainbow Blue in the $762,500 Breeders Crown at Woodbine. As a four-year-old, Invitro quickly acclimated to the older pacing mare ranks, scoring a marquee victory in the $364,000 Roses Are Red final at Mohawk and finishing three-quarters-of-a-length in front of fellow 2011 Hall of Famer Burning Point.

Eventually, after 40 years in the business, Irwin got something from Invitro that he wanted even more than having a champion horse. “What has been special to me, personally, is what she did to my family. She brought my family into the horse business with me. She brought them to the races, to the excitement, to the enjoyment and that was big for me,” said Irwin, who relished sharing it with his wife, Pat, as well as his kids and grandkids. “For years, it was just something that I did on my own. And what she did was bring everyone into enjoying it with me,” he said. “And, really, that’s all I ever wanted.” 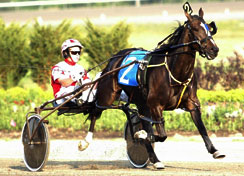