Silver Reign, a 1985 daughter of Kawartha Skipper out of the Smog mare, Silver Wraith, ruled the Ontario racing circuit in the late 1980s.

Bred and owned by Eugene Forbes of Walkerton, ON, and conditioned by the legendary William “Bud” Fritz (himself a Hall of Fame inductee in 2001), Silver Reign proved herself the toughest of pacing fillies, amassing a bankroll of $766,871 in 95 starts. Her record of 42 wins, 16 seconds, and 11 thirds, and speed badge of 1:55.4, stand testament to her grit and desire. 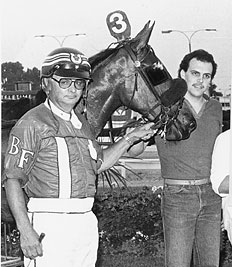 In 1987, at the age of two, Silver Reign paced to victory 15 times in 22 starts, earning close to $400,000. Among her triumphs were the Champlain Stakes, the Trillium Series stake, the Flamboro Breeders, and an elimination of the Sweetheart Pace. (she placed second by a nose in the $1 million final.) Although Silver Reign proved at two that she could hold her own with the best the Meadowlands had to offer, Forbes remained committed to the then-fledgling Ontario Sires Stakes (OSS) program and raced his filly almost exclusively in-province after that initial foray south. Silver Reign trekked from Windsor to Sudbury in 1988, claiming victory in 11 of 14 Sires Stakes starts. On one occasion at three, she failed to pick up a cheque in the Milton Stakes at Mohawk, but less than 24 hours later was standing in the winner’s circle at the Western Fair for an OSS event.

She was also victorious at three in the Fan Hanover (where she set her lifetime mark), a Greenwood Summer Championship elim, and the Flamboro Breeders’.
Silver Reign took home O’Brien Awards as Canada’s top pacing filly at both two and three, and now has a stakes series for sophomore pacing fillies named for her at Woodbine.

Owned since 1995 by Dr. John McKnight of Northfields Farm in Meaford, ON, Silver Reign was as successful a broodmare as she was a racehorse. Her most illustrious progeny was Northern Dynasty (by Camluck), as durable as his dam and a winner of $697,000 in 135 starts from age two to eight. She also produced Northern Dynasty’s full-brother, Northern Knight, a winner of $375,000 before his untimely death at age six.

Collectively, her 13 foals, 11 of which have started, have earned more than $1.6 million. Silver Reign’s offspring have included six $100,000 plus winners, with her foals boasting an average per starter of more than $183,000. McKnight, who owned Silver Reign until her death in 2008, says the mare “gave us a lot of thrills. We sold seven or eight yearlings from her for $100,000 plus, and one brought more than $250,000.” He recalls, “She ruled the place like the queen. She was the alpha mare, and she did as she pleased. There was no nastiness to her, but she had everyone’s respect. To put a shank on her and lead her was like leading an army tank. And her foals were all like her in personality. They all were loaded with confidence in themselves. “She put a lot of bread on the table and put up a lot of fences around here.” Silver Reign died in mid-summer, at the age of 23. “We found her in the pasture,” says McKnight. “I think her heart just stopped. She has a home under a tree here on the farm.” 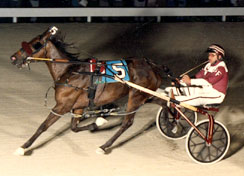