Wesgate Crown’s Hall of Fame career nearly ended minutes after it started. The two-year-old homebred son of Royal Prestige—Armbro Gaelic had just finished a spectacular debut, winning an elimination for the 1993 Peter Haughton Stakes in 1:59 July 27 at the Meadowlands. Just after his co-owner/ breeder, Paul Simmonds, left the jubilant winner’s circle to return to the clubhouse, a groom was walking Wesgate Crown back to the barn when the trotter heard a tractor behind him and spooked, breaking away. He crashed through a barrier and into the parking lot. Neither Simmonds nor Wesgate Crown’s trainer, Raz Mackenzie, saw the incident. When Mackenzie was told the colt was loose, he raced to find a somewhat stunned Wesgate Crown still loose, still with a damaged sulky attached. Mackenzie freed his colt, who had several scrapes, then called a vet over to check him. The colt was okay. “It was pretty miraculous,” Mackenzie said. “He was fine the next day when we jogged him, except for the scrapes.”

In his second career start, the $625,250 Peter Haughton final a week after the eliminations, Wesgate Crown made a furious rally from ninth to narrowly win in 1:58.2. Simmonds, a Toronto businessman, had already turned down an offer of half-a-million dollars for his colt after the elimination victory. “I’d been in the business since the mid-’80s,” he said. “I was waiting for a horse like this. I said, ‘You know what? I’m going to take a shot with him. I didn’t breed to sell him.'”
Good decision. 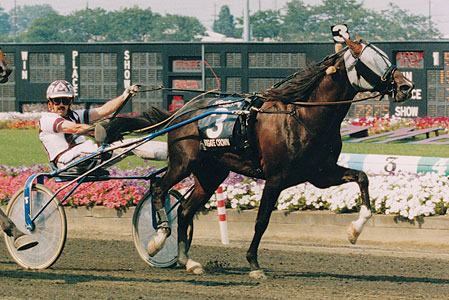 But Wesgate Crown didn’t do as well at three. “He was a horse that was phenomenal at two, but had a very disappointing three-year-old season,” Simmonds said. After being nosed in an elim for the Yonkers Trot in his three-year-old debut, Wesgate Crown broke in the $286,280 final. An ill-advised throat surgery didn’t help matters. End of story, right? Wrong. Wesgate Crown returned to win stakes races not only in North America, but in Europe as well. In North America, he captured the $200,000 Maple Leaf Trot and his second Breeders Crown at the age of six, earning the U.S. older trotting colt championship four years after his first one.

In Europe, Wesgate Crown captured the Italian Lotteria and Gran Premio Vittorio di Capuae, finished second in the Elitlopp and Copenhagen Cup and third in the Prix de France. “He raced ‘Over The Pond’ and represented Canada in a very courageous way,” Mackenzie said.

Wesgate Crown retired with 29 victories, 16 seconds and 11 thirds in 85 starts, with earnings topping $2.5 million and a lifetime mark of 1:52.3. “He didn’t win every race, but he tried his best every time he got behind the gate,” Mackenzie said. “I think he liked what he was doing. He liked to race. Every day was a good day with him.”

As a stallion, Wesgate Crown sired the winners of more than $15 million, including Crown Lad, Westcott and Big Z Crown, three of his 54 progeny who have won more than $100,000. Eight of his offspring won in faster than 1:55. “He was a very quiet, well-mannered horse,” Simmonds said. “Unfortunately, in 2004, he had kidney failure, so we put him down. I was there when we did it. He was 13 years old, which isn’t old. It was a pretty sad day. This business is all ups and downs. That was the saddest day of my life.” 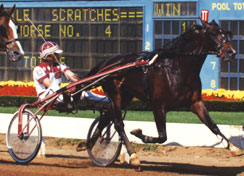