A  career winner of 6,621 races and nearly $110 million in purses since his career began in 1977, Steve Condren of Milton, ON has been at or near the top of Woodbine Entertainment Group harness racing circuit for some 30 years.

He said he is proudest of his consistency. “The game has changed a lot in the last 10 years,” Condren said. “I would say the biggest thing in my career is respecting the horse and the people that I work for. I’ve been fired and hired by the same guys umpteen times over 30 years. I don’t know how you can explain that, but there’s an old saying in this business, ‘What goes around, comes around.’ You just have to remember to watch what you say and who you cut up.”

For much of the last three decades, Condren and fellow Hall of Famer Doug Brown were synonymous at the top of the nation’s driving charts.

Condren grew up in St. Catharines, ON, but his family moved down the street from Mohawk Racetrack when Condren was in Grade 6. “That winter, basically, I was walking down the road and went into the standardbred horse business,” Condren said.

Along the way, he worked and drove for Tom Artandi, John Burns, Bob McIntosh, Bill Robinson, Brad Maxwell, Gene Riegle and numerous other greats of the game. 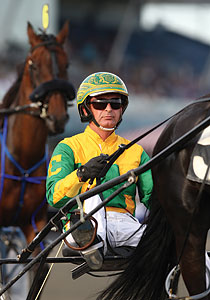 He won his first race driving Farm Taara to victory at Orangeville Raceway in 1977. He presently ranks among the top 10 drivers of all time in lifetime earnings, and between 1984 and 2010 he recorded 27 consecutive $2 million plus seasons. Condren won the 1997 O’Brien Award as Canada’s driver of the year, and was runner-up to Randy Waples in 1998.

Condren’s so proud of his career longevity at WEG that he wears a ring honouring him (many times over) as the leading driver on the Mohawk Grand Circuit.

All of which pales in comparison with his cancer battle. He doesn’t like to think about what might have happened if he hadn’t insisted on having a colonoscopy. As it was, the news was devastating to hear. “To tell you the truth, if it wasn’t for me demanding it, it probably would have gone another two or three years without finding out,” Condren said. “Who knows what it would have manifested into by then?” The driver, who turned 54 July 6, will never forget hearing the news in early April just days after returning from wintering in Florida. Initially, he kept the news quiet and continued to drive.

When his name appeared on the ballot for the Canadian Horse Racing Hall of Fame, Condren was further motivated to avoid having the news spread. “I didn’t want anybody to know that I was sick, too. I didn’t want anybody voting for me because they felt sorry for me. It was hard to keep that quiet,” Condren said. A few days later, Condren received word he was a first-ballot Hall of Fame inductee. “That week was two pieces of good news. The one was being elected to the Hall of Fame, the other one was finding out that I had a really, really, really good chance of beating (cancer),” he said.

A short time later, he issued a press release saying he was suspending his driving career to devote full attention to his cancer battle. As for the Hall of Fame induction ceremony, Condren’s not sure whether he’ll be well enough to attend. “It’s smack in the middle of my operation, but if I can get there, I’m going to be there,” he said. “If I am there, I’ll keep it short and sweet and if I’m not there I’ll probably get my son to say a little something.” For now, he has one priority. “My concern is getting healthy. If I get back in the bike, I’ll have some fun again and it will be great. Right now, I’ve got to be concerned with fighting this.” 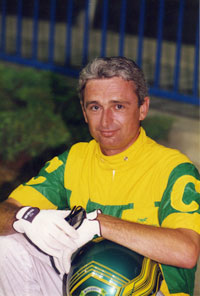