On April 5, 1991, a 42-year-old trainer with a modest six-horse stable won a $12,000 claiming race for maiden fillies at Greenwood racetrack. It was Mark Frostad’s first trip to the winner’s circle. Who possibly could have predicted what was in store for the former bloodstock agent and graduate of Princeton University and the University of Western Ontario?

Twenty years later his resume reads like this: four Queen’s Plate winners – Victor Cooley, Scatter the Gold, Dancethruthedawn and Eye of the Leopard; victories in Canada’s post prestigious races – the Canadian International, Atto Mile, Woodbine Oaks, Breeders’ Stakes, Prince of Wales, Cup and Saucer, Coronation Futurity, Grey, Natalma and Princess Elizabeth, along with a Breeders’ Cup Turf championship (Chief Bearhart), and stakes wins at numerous major U.S. tracks. In all he has over 600 victories and more than 150 stakes to his credit. He remembers his first stakes victory, with Bruce’s Mill for Earle Mack in 1994, and his first graded stakes victory, the Iselin Stakes at Monmouth, N.J., in 1996 with Sam-Son Farms’ Smart Strike, a colt who later become the world’s leading stallion. 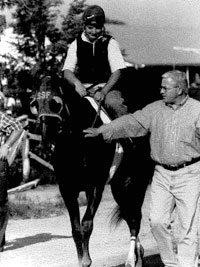 A native of Brantford, ON, Frostad grew up around horses on his father George Frostad’s Bo-Teek Farm in Vineland, ON, home of several champions. He played hockey, football and rugger while attending Trinity College School, Princeton and the University of Western Ontario, where he earned an MBA. Because of his father’s influence, Frostad (his dad is a member of Canada’s racing hall of fame and former Chief Steward of The Jockey Club of Canada) was closely connected with the world of thoroughbred racing. He was a bloodstock agent and president of the Canadian Thoroughbred Horse Society and a trustee of the OJC.

The 2011 season was a solid one for Frostad with more than 23 wins and stakes winners Grand Adventure, Hotep, New Normal and Windward Islands.