The person who shook up the staid traditions of the horse racing establishment in Canada in the early years of the 20th century was a gracious, dignified, but resolute woman, an American belle whose social circle of friends included the elite of America’s wealthiest horsemen, the Belmonts, Vanderbilts, Jeromes, and most importantly, Pierre Lorillard, the multi-millionaire tobacco tycoon who owned Rancocas, a sumptuous 1,500-acre stud farm near Jobstown, N.J., one that she would inherit when he died in 1901.

Her name was Mrs. Lily Adeline Livingston, a wealthy horsewoman who arrived in Ontario in 1908 and proceeded to go head-to-head with those who had dominated the breeding and racing scene here since its earliest days. At a time when women did not have the voting and legal rights of men, and were suppressed, this determined lady, who was anything but a feminist during her extraordinary life, challenged the hierarchy of the Ontario Jockey Club and its archaic rule that only a British subject residing in Ontario was allowed to enter a horse in the King’s Plate. Even though her horses were bred, foaled in raised in Ontario, the OJC would not allow her to nominate them for the Plate. Lily was “regarded as a menace to the existing sportsmen in control.” She had spent millions bringing to Canada some of the choice blooded stock of Kentucky, Virginia and Maryland. The OJC relaxed its rules for the 1921 Plate, allowing her to enter Moll Cutpurse and Flea. By 1925 the rules were revised and she was ineligible again.

Horses that she had bred at her 500-acre Pontiac Stock Farms in Cobourg, Ont., twice won the Plate – Tartarean in 1915, who edged stable mate Fair Montague, and Ladder of Light in 1919. They were from her first crop foaled at Cobourg and were reluctantly sold as yearlings. Her horses also ran one-two in the 1926 Coronation Futurity but she sold them as well because they had trained outside Canada for a month. Until she retired from the Ontario racing scene in the late 1920s, she annually challenged the Seagram Stable for breeding the most winners and in purse earnings for more than 20 years.

Born in 1865 in Brooklyn, N.Y., the former Sarah Adeline Barnes was married twice, the second time in 1906 to George Livingston, a Tammany Hall politician. Lorillard, her mentor, became the first U.S. horseman to win the Epsom Derby with an American-bred horse. Iroquois won the Derby and St. Leger Stakes in 1881. While discussing Lorillard’s other great horses, Parole and Saxon, in The Great Ones, author Kent Hollingsworth stated that, “When weekends here (Rancocas) wearied Mrs. Lorillard, she left for Europe for six years, and beautiful Sarah (Lily) Barnes became hostess at Rancocas.”

After Lorillard’s death, Mrs. Livingston ran the spacious Rancocas farm before moving the huge band of breeding stock and studs to the shores of Lake Ontario and Cobourg, erecting the most up-to-date establishment of its kind in Canada. Her long-time farm manager and veterinarian at Rancocas, Dr. Robert Carter, a Canadian from Galt, Ont., encouraged her to move to Canada. In the 1900s the Moralist Movement was successful in banning horse racing in many States and it had become harder to find race meets suitable for large stables. Rancocas had become an economic burden and Lily sold it to oil millionaire Harry F. Sinclair, moving her stable and broodmares to Canada.

Mrs. Livingston’s list of outstanding race horses included the great mare Sotemia, which twice won the OJC’s 2 ¼ mile handicap race and set a world record while winning the Endurance four-mile race at Louisville, Ky. Her great stallion, Lovetie, set a track record at Fort Erie that lasted for many years. When Lovetie went to stud he was one of the most prolific stallions in Canada. One of his offspring was a filly, Rare Jewel, who would be a catalyst in a betting coup by Toronto Maple Leafs owner Conn Smythe. Smythe had wagered some $100 at the track and with the bookies on the 106-to-1 longshot. The winnings of over $10,000 enabled Smythe to acquire defenseman King Clancy from the Ottawa Senators. It was the first time Smythe’s colors had ever come down in front.

Lily Livingston’s silks, blue, silver braid and black cap, often graced the winner’s circle at Woodbine Park. She was also a great plunger with the bookmakers, once winning more than $60,000 on a wager as well as several other bets that netted her in five figures.

During the First World War Mrs. Livingston opened her Pontiac Stock Farm to wounded veterans to recuperate during the summer months. She also provided homes for track workers and riders at her farm and was a major supporter of the Cobourg Horse Show. She left for Virginia after her dispersal sales of her prime breeding stock in 1931. Lily died in a nursing home in Virginia in October, 1945. A writer said she was “one of the most gracious ladies that ever graced the turf in any country.” The Blood-Horsemagazine in Kentucky said her passing “removed from the Thoroughbred scene one of the last links with the fabulous racing days of the Gay Nineties.” The grand dowager of racing, with her chic hats and flowing gowns was described in the Toronto Star Weekly as “the Queen Mary of Canadian racing,” saying “she is to Woodbine what Queen Mary is to Epsom Downs. There is the just the same atmosphere when the tall, stately southerner comes into the members’ enclosure, and bows right and left as everyone nods and speaks to her.” 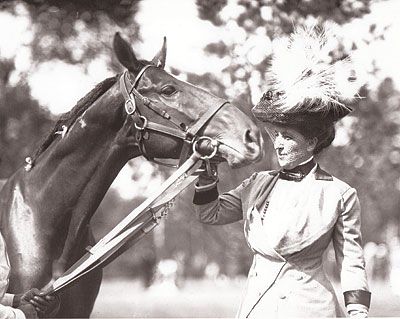