E.P.Taylor’s desire to acquire the best bloodlines in the world in the 1950s resulted into a legendary epic that would forever impact on Thoroughbred breeding throughout the world. It is a saga ingrained with countless “what ifs” and a royally-bred mare, Lady Angela, who was by one of the greatest sires of that era—Hyperion.

The chronology of the events that would ultimately produce Northern Dancer, Nijinsky II, Danzig, Storm Bird, Sadler’s Wells, and most importantly Nearctic, begins in 1952 when Taylor contracted George Blackwell, a young bloodstock agent with the British Bloodstock Agency.  Blackwell’s task was to buy the best mare to be had in the Newmarket December Sales, and at any price. As it turned out, selecting the best mare was easy; it was buying her on Taylor’s terms that was the trick. She had won only a minor stakes race at Epsom in 11 starts, but her bloodlines were impeccable, Hyperion out of Sister Sarah, who had produced a champion English filly. Also, she was in foal to Nearco, though whether this was a plus is debated, for Lady Angela had already produced two foals by Nearco; one was stakes placed but temperamental and the other had been gelded.

Lady Angela’s champion half sister, Lady Sybil, was a daughter of Nearco, suggesting that her family might have an affinity for the great son of Pharos. The Hyperion cross with a Nearco mare had produced a champion in France. Taylor was aware of these bloodlines when he made up his mind not only to purchase Lady Angela but to have her remain in England to foal and be bred back to Nearco before shipping to Canada.

Martin Benson, Lady Angela’s owner and a majority shareholder in Nearco, was reluctant to agree to these terms outlined by Blackwell. His obstinacy, however, was finally resolved when Taylor agreed to pay in U.S. dollars for the $3,000 breeding fee to Nearco. Lady Angela was duly purchased for a sale topping 10,500 guineas—about $35,000 in American dollars. After foaling a colt (Empire Day), she was bred back to Nearco. She and her suckling colt and her unborn foal sailed to Canada.

If Taylor and Blackwell hadn’t persisted on the purchase terms with the breeding nomination to Nearco, there would have be no Nearctic growing up at Taylor’s National Stud Farm (later renamed Windfields Farm). Another “if” occurred in this saga when it was learned that Taylor wasn’t the only Canadian interested in Lady Angela. A bloodstock agent for Mrs. Elizabeth Graham (cosmetics queen Elizabeth Arden) had extolled the virtues of the mare, suggesting she would be a great addition to her Maine Chance breeding operation. She eventually turned the idea down.

One more “if” resulted when Lady Angela and her suckling colt arrived in Montreal. The trip could have ended in tragedy when the ship’s crew, inexperienced with horses, tried to lead Lady Angela into the unloading crate without her foal. The mare, frantic to avoid separation from her baby, fought them desperately. The situation appeared ripe for injury or for a stress-induced miscarriage. This is when Harry Green, Windfields’ stallion manager and a long-time employee of Taylor’s took charge. He was no stranger to volatile animals. He could see the mare was in trouble, slipping and sliding around on the steel decks. She absolutely refused to go into the crate. So he put her back in her stall and then carefully accompanied the suckling up out of the hold and returned for Lady Angela. Now anxious to rejoin her foal, she loaded calmly. Green had saved a dire situation, one which might have resulted in Lady Angela suffering a broken leg and having to be destroyed.

The foal she fought so hard to protect, Empire Day, would win only three races in 36 starts and would sire one stakes winner, 1964 Canadian champion older male, E. Day. But the foal she carried was Nearctic, a much superior racehorse and the sire of Northern Dancer. The foundation of Taylor’s breeding empire had arrived.

Lady Angela, who made a vivid and lasting impact on the breed world wide, also produced stakes winners Choperion, winner of the Coronation Futurity and second in the Queen’s Plate, and Lady Victoria, winner of the Princess Elizabeth, and a multiple stakes producer. 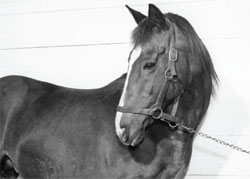