The achievements of Victorian Era in the 1960s will undoubtedly never occur again. The modern thoroughbreds of this era would either never survive the rigors, or be given the chance to emulate the feats of this son of Victoria Park. His trainer, Lou Cavalaris, Jr., when asked to put the colt’s accomplishments into perspective, replied “Who today wins 18 stakes races?”

Understating the colt’s gaudy record during a four-year career, Cavalaris added, “He simply was a great Canadian bred.” Yes, a horse that found himself competing against the best of his generation, and usually carrying top weight, as much as 133 pounds. Of his 48 starts between 1964 and 1967, Victorian Era won 18 stakes races and was second or third in another 12 added-money events. He was out of the money only seven times. Ridden usually by Avelino Gomez, Victorian Era broke track records at Greenwood and Fort Erie. A small, rugged colt, he was owned initially by Woodbine director Allen Case and later by his breeder, E.P. Taylor. Victorian Era was Canada’s Horse of the Year and champion Older Horse in 1966 and co-champion three-year-old with his nemesis, Good Old Mort, in 1965.

Case, an investment broker and also a breeder of several stakes horses, bought the colt at Windfields’ pre-priced yearling sale in 1963 for $25,000. He sold him back to Taylor (terms undisclosed) in 1966 while the colt was reeling off nine stakes victories. Victorian Era was from the first crop of Queen’s Plate winner Victoria Park, who would go on to sire the winners of three successive Plates — Almoner, Kennedy Road and Victoria Song. However, Victorian Era was denied a chance to compete in the 1965 Plate. As a juvenile in 1964 the colt had two wins and two seconds in a six-race campaign. On Dec. 15 of that year, a $50 sustaining payment for continued eligibility for the Plate was missed on Victorian Era’s behalf amid unusual circumstances. With Allen Case away in Aiken, SC, and the secretary responsible for his business affairs in hospital, the required payment was not made.

The oversight rendered Victorian Era ineligible for the Plate. The consequences of his ineligibility became more acute when he established himself as one of the dominant three-yearolds in Canada. That spring he won the Marine Stakes and defeated eventual Plate winner Whistling Sea in the Queenston Stakes. He further underlined his authority with an eight-length win in the Toronto Cup and then captured the Achievement Stakes while preparing for a show down against Whistling Sea in the Heresy Stakes at Fort Erie. Victorian Era won by a head as the odds-on favourite. Whistling Sea suffered an ankle injury, finishing seventh.

Victorian Era squandered an opportunity to cement his leading status when he finished second in both the Prince of Wales and Breeders Stakes to his arch rival, Good Old Mort. An early voting deadline perhaps hurt his chances to win the three-year-old title outright as he finished the season with wins in the Sandown and Horometer Stakes and eight stakes victories in total. The following year, he beat George Royal for Horse of the Year honours with nine stakes victories and at age five won his 18th, the Jacques Cartier.

Cavalaris often tried Victorian Era against leading U.S. breds at Saratoga, Aqueduct, Thistledown and Rockingham. His best finish was a second in the Ohio Derby and runner-up as the odds-on favourite in the Gallahadion Handicap at Aqueduct to Hedevar, spotting the winner 10 pounds. Cavalaris blamed Victorian Era’s lack of success in his forays below the border to the absence of his regular rider, Gomez, who was banned from riding in the U.S. at the time. “Gomey fit him perfectly. We missed him.” 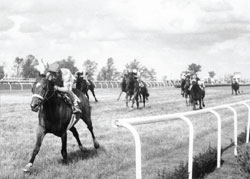