Ten years after pacer Apaches Fame was inducted into the Canadian Horse Racing Hall of Fame and nine years after his trainer and driver, William “Bud” Fritz of Walkerton, ON was also enshrined, the circle is now complete.

Back in 1990, Fritz not only campaigned Apaches Fame, who became the first Ontario-bred horse to win the North America Cup, but he also raced an unbeaten Ontario-bred trotter named A Worthy Lad.

Thirty times A Worthy Lad went to the gate and 30 times he went to the winner’s circle. A Worthy Lad raced everywhere in Ontario, won 24 stakes — including the country’s premier stakes race for sophomores, the Canadian Trotting Classic — and delivered a spotless record. Not once did he break stride, get nipped at the wire or fail to fire in the lane. A perfect, and still unmatched, record. Even the great pacer Somebeachsomewhere was nipped at the wire in one of his otherwise-perfect 21 starts.

“All I know is that I won every trip that I sat behind him and that’s pretty rare,” said Fritz.

By all accounts, it wasn’t a smooth start to A Worthy Lad’s historic career. In fact, as a yearling he was thought to be unbreakable and many people expressed to owner/breeder Dr. Joseph Johnston of Essex, ON that it might be worth it to stop trying. Mark Austin finally succeeded in breaking A Worthy Lad, who was then sent on to Fritz.

“As a two-year-old at Hanover (Raceway), I think the track had to be close to four-inches deep in mud. Most of the guys wanted to scratch and I didn’t say anything because I knew he could go through the mud. It was deep and I think he trotted that night in 2:05 in terrible conditions,” said Fritz, whose son Randy was the horse’s faithful caretaker for his entire career.

The most vivid memory is the race where, by all rights, the streak should’ve ended. The undefeated career and undefeated season almost slipped away in the last start of A Worthy Lad’s two-year-old campaign, a $100,000 Ontario Sires Stakes event in London, ON. Johnston remembers early chaos, including the one-horse falling down in the post parade and then, not surprisingly, making a break just after the start. Starting from the trailing position, A Worthy Lad navigated around that horse, only to have the second-position horse run in front of him as well. Again, Fritz moved him over and clear of trouble. Almost comically, and immediately thereafter, two more horses he was following made breaks, causing him to again move farther to the right. All told, A Worthy Lad had trotted the first eighth-of-the-mile straight sideways.

“He spotted them an eighth-of-a-mile, if not more,” said Johnston, incredulously. “He should have been out of the race entirely, but by the three-eighths pole he was back in front. I have no idea how far he actually would have trotted between those two poles. That race was unbelievable beyond all of the other races that he won. It was almost like he wasn’t supposed to get beat. He was unbeatable that night.”

“He was all heart out on the track,” Fritz said.

Ironically, it was his heart that ended his racing career. At the end of his three-year-old season, A Worthy Lad was sold to Swedish interests with close to $450,000 on his card and a mark of 1:57.3. Soon after arriving at his new home overseas, a heart condition was diagnosed and he was promptly retired from racing and sent to stud, where he also suffered from fertility programs.

If the swan song to his two-year-old campaign — where he won 17 in a row and was named Canada’s top freshman trotter at the O’Brien Awards — was a show stopper, A Worthy Lad proved that there was more where that came from at three. He won another O’Brien Award thanks to 13 more wins in as many starts, the sweetest coming in the Canadian Trotting Classic at Greenwood Raceway in Toronto, where he finally had the chance to test — and beat — a few highly-touted U.S. invaders. 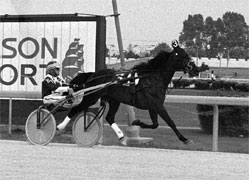