Classic Wish was a consistent, successful performer on the racetrack, but as a broodmare she has excelled.

The Ontario-bred daughter of fellow Canadian Horse Racing Hall of Fame inductee Armbro Emerson, is one of only three broodmares to produce not one, but two Little Brown Jug champions.

Her two most outstanding offspring, Bettors Delight (sired by Cams Card Shark) and No Pan Intended (Pacific Fella), both won the Jug (in 2001 and 2003, respectively) and had combined earnings exceeding $4 million on the track before going on to successful stallion careers.

Bettors Delight, who was inducted into the Canadian Horse Racing Hall of Fame in 2007, won the 2000 Breeders Crown and was named Canada’s horse of the year in 2001 after winning the North America Cup and the Jug. It was one of three O’Brien Awards Bettors Delight won despite only racing two seasons before heading to stud in New York.

Meanwhile, No Pan Intended was a Breeders Crown champion, captured the Pacing Triple Crown (Little Brown Jug, Cane Pace and Messenger Stakes) and was named U.S. horse of the year in 2003.

For her part, Classic Wish was inducted into the U.S. Harness Racing Hall of Fame in 2004. Also among Classic Wish’s progeny (from 11 foals to date) is No Wishes, a gelded No Nukes son who went on to earn nearly $400,000. Another son, Classic Card Shark, has just under $170,000 in earnings.

On the track, Classic Wish earned $436,273 in 144 starts with a lifetime mark of 1:52. In 1993, as a sophomore, she dominated her Ontario Sires Stakes (OSS) division, finishing in the top three in five OSS Gold Eliminations and three Finals.

Classic Wish was bred by David and Mary Lemon’s Daylon Farm in Komoka, ON, near London. She was originally named Daylon Mystery.

Daylon consigned Classic Wish to the Canadian Classic sale in September, 1991, where she fetched $25,000. “She sold to John McKinley, who changed her name and raced her at two,” Lemon told The Canadian Sportsman’s Karen Briggs. “Then he sold her to John Grant, who raced her at three and four.” Waterdown, ON trainer Scott McEneny would guide the filly through the sophomore season in which she became an OSS Gold threat.

Though Classic Wish matured to be just 15:1 hands, her long body type caught the eye of Winbak Farms’ Joe Thomson, who paid $42,000 (U.S.) for the mare at the close of her five year-old season. Thomson was looking to build a broodmare band with speed to burn, and Classic Wish’s 1:52 mark was notable for the time. Her first foal, Bettors Delight, didn’t impress size-wise either, but he fetched $65,000 as a yearling, going again to Grant of Hornby, ON. His later syndication for $4 million as a stallion made the investment all the sweeter.

Given the success of Bettors Delight, it’s little wonder that Classic Wish’s 2000 foal, by New Jersey sire Pacific Fella, was on the radar of the Peter Pan Stables’ Bob Glazer early on. After visiting and inspecting No Pan Intended several times as a yearling, he purchased the colt at the Kentucky sale for $150,000. Though the colt’s slow start as a two-year-old almost tempted Glazer to geld him, patience once again paid off when No Pan Intended hit his stride at three and became the sport’s 10th pacing Triple Crown winner, under the tutelage of Ivan Sugg.

Now, as one of the Peter Pan Stables’ premier stallions, standing at Tara Hills Stud, No Pan Intended is the proud papa of the collective earners of $9.7 million (U.S.), including such stars as The Mohegan Pan, Shipps Bikini, Southwind Swallow, and millionaire Nebupanezzar.

Which just means Classic Wish’s profound impact on harness racing will be felt for many years to come. 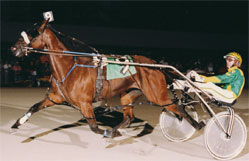