The Ontario-bred son of Grinfromeartoear out of Worlds Sweetheart retired from racing at the end of 2009 as the richest pacing stallion in the world and the richest Canadianbred standardbred of either gait. Less than six months after he left the track, the winner of $4,143,492 lifetime was a first-ballot inductee in the Canadian Horse Racing Hall of Fame.

Mister Big retired as the second-richest pacer to ever strap on a sulky, just $252,702 behind the $4,260,959 gelding Gallo Blue Chip earned. That makes Mister Big the richest intact male pacer ever.

He is just the second pacer to surpass $4 million lifetime and he reached that figure on both sides of the border, despite the fact the United States Trotting Association (USTA) converts Canadian earnings into U.S. currency and Standardbred Canada counts both countries’ currency at par.

Joe Muscara Sr., of Huntingdon Valley, PA, purchased Mister Big for $225,000 from Kentuckiana Farms and trainer Tim Pinske at the 2006 Harrisburg Mixed Sale and placed the pacer in the care of trainer Virgil Morgan, Jr.

“I went to the Harrisburg sale for one reason—to buy Mister Big,” Muscara, Sr. said in 2007.

“We paid a little bit more than we originally planned to, but I think he’s been worth it.”

Muscara, Sr., brought Mister Big back to the track for his six-year-old season in 2009 despite an incredible campaign in 2008 in which the pacer won 11 of 14 races, earned over $1.5 million and grabbed the Dan Patch Award as the older pacer of the year in the U.S. Muscara, Sr. could have easily retired Mister Big to a lucrative stud deal at the end of ’08 with over $3.3 million to the pacer’s name already by that point.

“He likes watching him race, that’s for sure,” Joe Muscara, Jr. said of his father. “Last year, they told us to get out, ‘Protect your stud career,’ but my dad’s been in this 40 years and he’s got a great horse. Why stop now? We’re playing with the bank’s money.”

Now, officially, the Muscaras have stopped with Mister Big. He’s been retired to Tara Hills Stud in Port Perry, ON, joining the Muscaras’ other big stud, Mach Three, sire of world champion Somebeachsomewhere.

Muscara, Jr. called Mister Big a “physical marvel. How can you race three years in the open with the times he does?”

“He’s got a big heart,” Muscara, Sr. said. “You don’t accomplish what this horse has achieved without having plenty of heart.”

In 2009, just down the road from where he took his first steps at Kentuckiana Farms in Lexington, KY, Mister Big won the $148,000 Allerage final at The Red Mile for the third straight year. His winning time of 1:49.2 was the 14th, and final, sub-1:50 mile of his career. 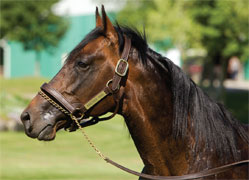